Dear Holly,
Every Tuesday evening, while my wife is out at her exercise class, I like to have what I’ve come to think affectionately of as a ‘zumba wank’ to relieve the day’s tension. I close the curtains, switch on the telly and beat one off to that fresh-faced Welsh lassie from the One Show. Unfortunately, last Tuesday I was mid-stroke when my wife returned unexpectedly and now she just keeps crying all the time and won’t even look at me. Is there any way I can erase her memory without causing terrible brain damage?
Dennis,
Felixstowe

Dear Dennis,
Unfortunately, unless you know Harry Potter or one of his magical chums, I don’t think memory wiping is a realistic option. Perhaps instead you could do what my sister did when she caught me reading in her diary about how she sharted during double geography and had to hide her pants in a plant pot: just hold your wife roughly by the throat, pull her pigtails and tell her you’ll remove the heads from all her Barbies and stamp on her favourite tea set if she doesn’t forget everything she’s seen and never talk of it again. It works a treat.
Hope that helps!
Holly 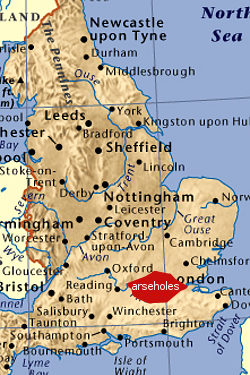 THE latest edition of the Times Atlas of the World has missed out a huge mass of twats talking shit at each other. Scientists have called for the volume to be pulped insisting it would give future generations a false impression of the dreariness of climate change debates between political commentators in the early 21st century.

The error arose after compilers were handed some data that two smart-arse pricks could not stop arguing about and so they decided to pretend they didn’t really exist.

Atlasiser, Martin Bishop, said: “We were wrong. Not only do they exist, but they’re everywhere and it’s fucking hellish.

“The new edition will therefore show a big blob of them in and around London, with various other blobs next to weird radio stations in America.”

The massive blobs formed after two distinct groups of sociopaths who have no training in climatology declared themselves to be expert in it.

The blobs grew rapidly as it emerged their interest in climate change was based solely on the same old tribal shit that gets them pathetically engorged and makes you want to nudge them quietly off a cliff.

Professor Henry Brubaker, from the Institute for Studies, said: “The only way we can try and reverse or mitigate the effect of the blobs is to remember that climate change is not about socialism or capitalism. It’s about gas and what it does and doesn’t do.”

Tom Logan, from Stevenage, added: “While Greenland does seem to be largely intact, if a doctor tells me I’ve got the flu, I’m more likely to believe him rather than some ponce who did English Lit and reckons my temperature is a left wing conspiracy.”