THE collapse of budget airline Flyglobespan has left hundreds of passengers marooned on a remote island populated by dinosaurs and cannibals. 'All you get is an answering machine'

The uncharted tropical island, known among local tribes as 'The Place Where Death Walks', features a rudimentary air strip used by the company as a base for connecting flights to places like Normandy.

But the collapse of the airline has left a steadily dwindling band of holidaymakers at the mercy of T-Rexes, pterodactyls and a community of cave-dwelling cannibals led by a 28-stone shaman who wears a pendant made of dried human livers.

Speaking on his mobile phone, stranded father-of-two Bill McKay said: "I paid £184 plus taxes to see my cousin Roger in New Zealand and here I am barricaded inside the plane, watching velociraptors tearing apart a fat family from Kent on the runway while huge leathery flying carnivores use their vast razor beaks to try and peck through the windows.

"You rely on these companies but when things go wrong they don't give a stuff."

Several of the frustrated holidaymakers have also reported family members being picked off by a sort of spider/lizard hybrid which inseminates humans with its eggs via a long scaly tongue, causing the snarling offspring to burst out of its victims' throats 48 hours later.

Emma Bradford, from Totnes, said: "This has been a total nightmare. Flyglobespan aren't answering their phones, there are no refreshment facilities and my husband is being digested by a massive carnivorous plant.

"When we get home I'm starting a Facebook group about this."

However, Stephen Malley from Swindon was more philosophical: "You have to accept the odd hiccup. I've fashioned a crude spear, daubed my naked body with stripes of blood and fully intend to just get on with it until help arrives."

He added: "The weather's been fantastic and I've got a really nice photo of a stegosaurus fighting a giant bat." 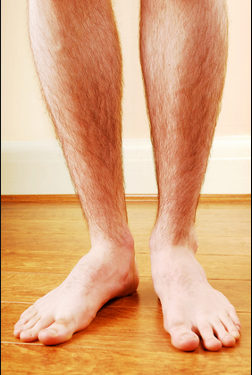 McCall had been road testing Garnier's new, all-weather Revitalift chin nourishing gel when at least 200,000 skin-deadening snowflakes crashed into the side of her car on the A21 near Sevenoaks.

Quickly realising she was not on television and the nearest camera was more than two days away by snow shoe, McCall telephoned BBC FiveLive to let them know her chin looked and felt fabulous.

But she added: "The Garnier helicopter is unable to get through. My feet are very cold. If only I could get out and dance like the stars of my new Sky One show Got To Dance."

After a few minutes McCall became delirious, drifting in and out of consciousness. Moments later she said: "My right foot has gone completely numb. I suppose I should take this opportunity to eat it without hurting myself."

The BBC presenters tried desperately to dissuade her before they were bombarded with texts and emails from thousands of angry listeners telling them to mind their own business.

McCall then attempted to deliver a running commentary on her foot-meal but her speech became increasingly muffled as she devoured her toes before working her way steadily towards the ankle.

After six minutes of chewing she let out a colossal belch and began interviewing herself in a frenzied manner which BBC doctors stressed was completely normal for Davina McCall.

Meanwhile the Met Office has repeated its warning that it's, you know, snowing a lot, so just stay indoors for a couple of days and watch telly.

A spokesman added: "Unless, of course, your chin is fully protected and you have at least three days worth of feet."