ALL your hopes and dreams were shattered by bastard Americans last night, just as you suspected they always would be. Along with six billion other humans you were forced to rethink your life plan as one set of bastards rejected a bail-out for another set of bastards because they were worried about losing their seats when a third set of bastards goes to the polls in November.

Emma Bradford, an office manager from Luton, said: "Whenever things were going well there was always this voice in the back of my mind saying, 'make the most of it because sooner or later it's all going to be completely fucked by some bastard Americans'.

"I just assumed I'd be horribly maimed as a knock-on from one of their insane, catastrophic wars, but instead they have, in the most beautifully co-ordinated fashion, demolished the system that provides me with a job, a home and the vague hope that life may not an elaborate waste of time.

"I'd applaud them, if only I wasn't so weak from all the nauseating terror."

Tom Logan, an engineer from Leeds, said: "I suppose I always knew America would eventually break the planet, like some ghastly, hyperactive toddler that gets hold of a mobile phone and then smashes it repeatedly against the edge of a table, but I never really thought it would affect me.

"But now, thanks to a combination of psychotic greed, political expediency and the sort of jaw dropping stupidity that makes you wonder if they actually know how to breathe in and out, I can look forward to a future of dysentry, burnt-out vans and an exciting range of low-fat meals, all of which – in some way or another – involve rodents."

Smokers Forced To Wear Their Lungs As A Hat 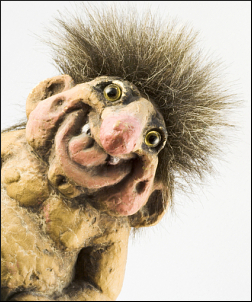 SMOKERS are to be forced to walk around wearing their lungs on their head, under tough new government rules. Cigarette packets must carry a picture of a troll

The lung-hat will be connected to the smokers via a series of tubes shoved directly into their nostrils.

As the lungs will cover the ears, holes will be drilled so the smokers are still able to hear the criticism of their friends and colleagues.

And once a month council officials will strap smokers to a chair, pluck the beating heart from their chest and shove it in their face shouting: "WELL!!? HAPPY!!?"

Public health minister Dawn Primarolo said: "Not only do I want smokers to come face to face with their own lungs, I want everyone else, especially children, to point at them and scream.

"Who in their right mind will want sit next to a smoker and his wheezing, unsightly flesh-helmet?"

She added: "Young smokers may think it's clever to walk around parading their fresh, pink lungs at a jaunty angle, but it won't be long before they look like a giant, disgusting fly. Just like Jeff Goldblum in that film."

Bill McKay, a smoker from Harrogate, said: "This is actually very useful. I had no idea the smoke was going into my lungs. I thought it went straight out my back passage like an exhaust pipe."