Bonuses No Longer Linked To Being Good At Things

BONUSES should no longer be awarded simply on the basis of doing something properly, it was claimed last night. As senior staff at the UK Border Agency shared £300,000 for dismantling the UK’s borders, experts said Britain had now developed a modern bonus culture which recognised the commitment of those who clearly have no idea what they are doing.

Helen Archer, director of the Royal College of Human Resources, said: “Until recently bonuses were limited to successful people who were good at stuff in what was obviously a deliberate and cynical attempt to keep money away from halfwits.

“Thankfully the train companies challenged this stale, 19th century mindset by giving millions of pounds to all those brave executives who somehow made rail travel in this country even worse.

“Meanwhile the civil service has blazed a trail with the innovative practice of setting bonus targets that are impossible to miss, even if you’ve been trampled by a horse.

“Bankers, on the other hand, seem to get bonuses for losing money and bonuses for making money, so we reckon the whole system may have been set up for the sole purpose of giving John Prescott a stroke.”

Archer added: “I myself was awarded a £25,000 bonus last year after I accidentally set fire to my office chair with a home-made flamethrower and subsequently burned our headquarters to the ground.

“I have to admit, the fact that only 57 people were hospitalised with smoke inhalation and horrific third degree burns did count in my favour.” 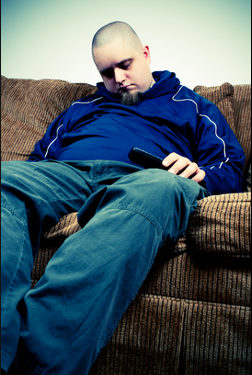 A THINK tank researching poverty in the UK has found that people living below the breadline are dreadfully boring. This one has fallen asleep in front of the 'telly'

The report shows that the poorest 10% of the population are eight times less likely to be invited to dinner parties or enjoy skiing holidays with a small group of friends.

Meanwhile many families could barely scrape together an afternoon bridge session in a cycle of loneliness described by the Young Foundation as 'The ineluctable result of being unable to hold a conversation for more than 10 minutes without reference to Independent Television'.

Researcher Julian Cook said:  "While it's appalling that the emotional needs of the underclass aren't being met, I suggest you try spending an afternoon with them as the discussion returns again and again to 'training shoes' and the best place to buy your Monster Munch.

"After three months research sitting in their dreary living rooms, eating their unacceptable biscuits and listening to their glottal stops, I had to book myself for a weekend in Champneys to wash the council off."

The foundation has called for government funding to be diverted from social housing and healthcare in order to teach the poor how to make brioche from scratch while deciding on the best place to position a 19th century French armoir.

Cook added: "It's the trickle-up theory of social inclusion – the country's poorest cannot truly integrate into society until their small talk about global warming doesn't make you want to hack your own balls off with a metal ruler and force them into your ears to make the noise go away."

Nikki Hollis, a Carlisle mother of six, said: "Somebody from the council came around with a collection of Anish Kapoor prints and a documentary about Elizabeth David. I went down the pub and swapped them for half a dozen chicken and mushroom Pot Noodles. Did I do it right?"