British Gas To Just Shoot Your Dog In The Face

SOMEONE from British Gas will be round this afternoon to shoot your dog in the face, it has been confirmed. They do prefer the dog to be very scared

If you don’t have a dog they will catch your cat and put it in a box full of scorpions.

And if you don’t have a cat they will just spray paint ‘kiddie fiddler’ on your front door and set fire to your shed.

It is the 27th year in a row that British Gas has chosen to make your life a total and complete misery in the run up to Christmas.

In 1993 they sent each of their customers a seasonal jiffy bag filled with assorted animal guts and faeces before ratcheting things up the following winter by planting bombs in 22 million cars and waiting until the last possible moment to announce which wire to cut.

The new millennium saw the company switch to more direct tactics, including kidnapping a random pedestrian, taking them to a disused warehouse and cutting off their ears before throwing them out the back of a van onto a busy high street with a warning note stapled to their gums.

In 2007 they produced their infamous ‘You’re all fucking dead’ TV campaign, starring Barbara Windsor, which ran alongside their strategy of bulldozing old folks’ homes in the middle of the night and forcing the now destitute residents to dance on the rubble for hours in their bare, arthritic feet.

The company has since expanded its programme of customer-based terror by hunting down people who have switched supplier and then shining a 4000 watt searchlight into their houses 24 hours a day, seven days a week, until they commit suicide.

A British Gas spokesman said: “Fuck you, that’s why.”

Barton Apologises For Not Punching Allardyce In The Kidneys 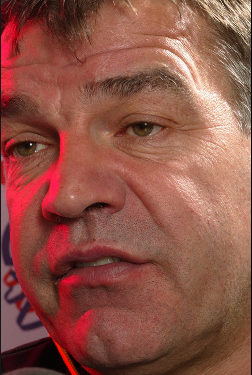 NEWCASTLE’S Joey Barton has issued a public apology after failing to assault Sam Allardyce on Sunday. Barton blamed the pressures of looking increasingly like Midge Ure for the lapse in judgement and apologised to fans upset by the Blackburn manager’s unpunched face and kidneys.

He said: “One minute I was playing a game of football, the next I was in the dressing room and it was only as I was filling Andy Carroll’s shoes with everyone’s semen that I realised I hadn’t twatted that fat bastard.

“That evening, I was so mortified I couldn’t even finish my three-way Dutch Steamboat.”

The FA has handed Barton a three-match suspension for the incident, seen as an unusually heavy punishment given the midfielder’s reputation as a violent psychopath.

An FA spokesman said: “I once saw Joey trying to kick the arse off his own shadow for following him around, so what kind of example is he setting when he walks past Sam Allardyce and doesn’t rearrange his double-glazing-factory-manager face?”

Barton has had a troubled history of neglecting to use his boundless reserves of funk, most notably at Manchester City when, despite featuring in 10 derby games, he never once hit Alex Ferguson with a bike chain or swung Gary Neville around by the moustache.

He admitted: “I need to start channeling my episodes more productively, so the next time I’m up against somebody like John Terry I’ll just imagine he’s a team-mate or some bloke who was walking past McDonalds, minding his own business.”