A NEW theme park will offer juggling, weed smoking and infectious diseases to students unable to afford to take a year out.

Set in a vast temperature-controlled plexiglass dome, the attraction is themed around ‘Gapnadesh’, a fictional country in the developing world that is cheap, hot and spiritual.

Students can enjoy stilted conversations with culturally-stereotyped locals, smoke chillums with a dreadlocked fruitarian whose parents own Scotland and pick up a devastating intestinal parasite from the attraction’s own-brand ‘Infecto’ drinking water.

The park’s headline attraction is Very Dangerous Bus Journey, a breakneck ride along a near-vertical polystyrene mountain track in an overcrowded vintage bus driven by a man who has not slept since 1997 and appears to be muttering a prayer.

A spokesman said: “Gap Year Land offers a life-changing experience for young people who can’t afford a lengthy foreign trip but still want to experience illness, sexual opportunism and a vague sense of being a good person in a hot climate.

“You certainly wouldn’t get to try your hand haggling over a 12p rickshaw fare at Thorpe Park.”

Gap Year Land visitors exchange their money for near-worthless Local Money, huge wads of which can be brandished insensitively at the ‘locals’ – actors who are being paid an authentic 4p a fortnight – when buying beads.

However Tom Logan, publisher of Rugged Universe travel guides, has criticised the venture: “This is a grotesque and ersatz experience based on crass stereotypes. The only way to really empathise with the the developing world is to flit through it on a 12-month holiday.”

US not intelligent enough to withstand Washington earthquake, say experts 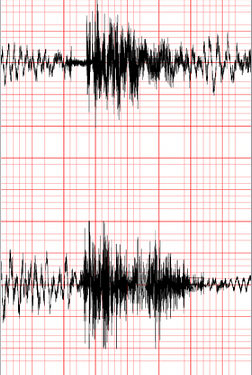 AMERICA may not have sufficient intelligence to withstand a seismic event at the centre of its political establishment, experts have warned. It's an exciting time for seismo-cretinologists

Researchers said that instead of seeing the Washington earthquake as the consequence of stored elastic strain energy driving fracture propagation along a fault plane, millions of Americans will think it was Angry Jesus.

Professor Henry Brubaker, of the Institute for Studies, said: “Right now, preachers, presidential candidates, Christian bloggers and Christine O’Donnell, the gay-hating wiccan, will be debating whether the earthquake is God’s frustration at excessive government spending or an attempt to ban abortion by turning the Supreme Court into a pile of rubble, thus destroying the piece of paper that Roe v Wade is written on.

“If you look at these read-outs from the idio-seismometer you can see that whenever there is an earthquake, a flood, a volcanic eruption, or a big wind, there is a spike in the number of people who believe that homosexuals are being punished for having all that sex.

“But when the wrath of God is visited upon Washington DC it opens up numerous justifications for the Almighty’s righteous fury, from the constitutional debt ceiling to Michelle Obama’s uppity Harvard law degree.

“Mark my words this is a prophecy of the end time, the end of days, the rapture, the Battle of Armageddon or some other complete fucking bollocks that will be believed by the 18-wheel truck-load.

“We’re also currently working on a correlation between the idio-seismometer read-outs and the donations to the Pat Robertson Wrathful Christ Funtime Children’s Bible Hour.”

Wayne Hayes, dean of the University of the American Family, said: “Once again these so-called ‘scientists’ and ‘seismologists’ think they know more about Jesus than we do.

“How many more earthquakes is it going to take until they pack away their microscopes for ever?”