GOOGLE'S new Nexus One mobile phone will be the first device of its kind to replace the human soul, the company claimed last night. Do us a favour and stick it up your arse

The search engine giant said the phone contained a range of exciting features including a 1Ghz Snapdragon processor, a five megapixel camera and the ability to supplant the intangible essence at the centre of your being that makes you who you are.

A spokesman said: "It's not that we've created a device so sophisticated that it's transcended all other technology and entered a spiritual plain. It's more that, thanks to all the other things we do, the human soul has now come down to our level.

"By analysing search terms we discovered that most souls are now as pointless and empty as a beautifully designed electronic device made in a vast factory by some really nice underpaid Chinese people."

Predicting a new age of endless, vapid communciation for no reason, Google insisted the Nexus One is the epitome of the company motto, 'First do something pointless for money'.

The spokesman added: "And it won't even be a case of downloading your soul into the Nexus. What remains of your soul will simply evaporate and the device will take over, freeing you up to search the internet for even more things you didn't need to know while scanning vacantly through YouTube for television programmes you don't need to watch.

"It will tell you when to laugh and when to cry and thanks to our exciting new partnership with Twitter you will know exactly what to love or hate for up to five minutes at a time – almost twice as long as the iPhone.

"And the power of the Snapdragon processor means the Nexus can quickly calculate what is beautiful and what is ugly and whether either of those things make you happy or sad. And it takes photographs."

The Nexus is likely to be one of the stars of the Consumer Electronics Show, which opens today in Las Vegas, alongside the latest version of the e-book, developed by some t-shirt wearing prick called Jeff or Sergey or Biz who decided all by himself that actual books don't work anymore. 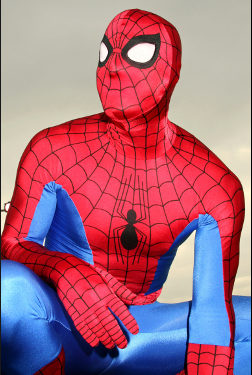 It is unclear whether Mr Brown is still Spiderman

Geoff Hoon and Patricia Hewitt sent shockwaves through Westminster after writing to Labour MPs saying that not only was Mr Brown still running the country but that it was only a matter of time before other people found out.

The statement said: "As we move towards a general election the Parliamentary Labour Party remains deeply divided over the question of who is prime minister. We discovered yesterday that it's Gordon Brown.

"Unfortunately too many Labour MPs continue to insist otherwise and we have therefore come to the conclusion that the only way to resolve this issue is to hold a secret ballot so that they can see his name printed on an actual piece of paper.

"Perhaps then they will accept the reality and we can all rally round and move forward under a new leader like Steve, or Jim, or old Billy Whatsisface from Stoke."

But Margaret Beckett attacked her former cabinet colleagues, adding: "As we embark on a challenging election campaign, pointing out that Gordon Brown is still prime minister does nothing to help the Labour Party."

Backbencher Martin Bishop said: "I've just claimed fourteen grand for election leaflets which make it very clear that Gordon Brown does not exist. Am I going to get my money back?"

Speculation has been building for months over who was running Britain, with many claiming it was Joanna Lumley, Twitter or whoever is in charge of buying UK government bonds at Goldman Sachs.

But a Downing Street spokesman confirmed Mr Brown was the prime minister, adding: "Oh, it's been at least a couple of years now."

Across Britain, ordinary voters were surprised to hear Mr Brown was still Labour leader, with many assuming he had been detained under section four of the Mental Health Act after claiming to be Spiderman.

Denys Finch-Hatton, a retired accountant from York, said: "Is he really? Good lord. I thought it was Peter Mendelssohn or that chap with the fancy hat. Does it really matter?"