SIR Clive Sinclair has been told to stop this nonsense and just make a little car. 'They all said I was mad'

Across Britain eager consumers were given a first glimpse of Sir Clive’s new city vehicle, the X1, and immediately agreed that he had somehow – somehow – come up with something that is even worse than the C5.

Tom Logan, from Finsbury Park, said: “For the last 25 years this man has been told consistently that the C5 was the worst invention of all time. And so he says ‘fuck the lot of you’ and comes back with something that is basically a bicycle with a deckchair and a hat.”

He added: “Clive – Four wheels. Put some doors on it. Maybe a CD player. You’re making this much harder than it needs to be.

“It can even be electric. That’s not weird any more. Some people even think it’s quite good. Why not try designing an ‘electric car’? Eu-fucking-reka.”

Jane Thompson, from Hatfield, said: “Clive, seriously, you’ve got to pack it in with the plasticene tricycles. It’s just not happening for you.

“Even the name… the ‘X1’? Have you been having those Space 1999 marathons again? Oh Clive…

“Computers, that’s your thing isn’t it? Have you though about doing something with computers?”

And Julian Cook, from Peterborough, added: “By the way, can I just ask – where the fuck is all his money coming from?

“I think there was maybe one guy at my school who had a Sinclair ZX Spectrum and I’m pretty sure his dad didn’t pay twenty five million quid for it.” 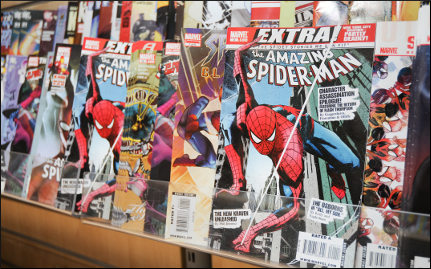 SINGLE women are frustrated that men have a poor knowledge of comics, especially Golden Age titles and the DC crossover series.

Researchers found that 83 percent of women believe detailed comic and sci-fi knowledge is the most important attribute in a potential partner.

Carolyn Ryan, a 29-year-old office manager, said: “For me it’s very much ‘comics first, clitoris second’, and I’m sure most women feel the same.

“Not only do I want a guy who collects comics, I want his comics to be properly catalogued in clear plastic bags with acid-free back boards.”

“They should make Warhammer condoms, shaped like balrogs and space marines.”

She added: “Obviously space marines are in Warhammer 40,000 as opposed to standard Warhammer, but broadly speaking they are both part of the same mythos.”

Hair-stylist Helen Archer said: “My last boyfriend was rich, sensitive and hung like a pack mule, yet completely out of his depth in Forbidden Planet.

“He claimed to have comics knowledge but at one dinner party he repeatedly listed Iron Man as his favourite DC comic. I wanted to crawl under the table.

“I mean sure, Iron Man did appear in the DC one-shot Iron Man and Submariner but believe me, he did not know that.”