Nothing Can Possibly Go Wrong With Gigantic New Bank

HBOS and Lloyds TSB last night created a monstrous new banking entity safe in the knowledge that nothing can possibly go wrong. Politicians and businessmen breathed a collective sigh of relief as two of the biggest names on the high street formed one very long name that will never do anything other than be brilliant all the time.

Martin Bishop, a senior trader at Madeley Finnegan, said: "History tells us that massive financial institutions do not fail. Ever. Okay, there is maybe a tiny handful of exceptions.

"Okay, maybe 40 or 50 exceptions. Actually, you're right, this is starting to look really dodgy. If you'll excuse me, I have to start selling the shit out of Lloyds TSB."

As shares in the new banking giant plummeted, the government came under renewed pressure to stop people wanting lots of money.

A Treasury spokesman said: "We've devised a regulatory framework that will effectively ban greed and no-one will ever be able to find a way round it. At least for the first six months. Probably."

Meanwhile Downing Street sources let it be known the prime minister played a key part in securing the deal which will put 40,000 people out of work. 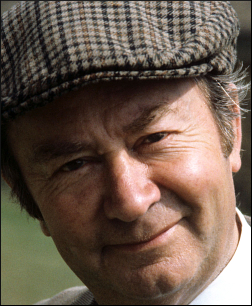 THE Lib Dems last night phoned 250,000 voters to ask if Nick Clegg was the medium sized one in Last of the Summer Wine. Clegg is in favour tax cuts and a nice cheese scone

Voters heard a 30-second speech by the Lib Dem leader setting out his vision for three elderly men who are really quite different but somehow manage to get along.

They were then asked to press 'one' if they thought Nick Clegg invented Wallace & Gromit, 'two' if they thought he was played by Peter Sallis, and 'three' if he was the 'young, sexy man from the Liberal Democrats'.

They were also asked a series of questions on education, health, tax and the environment before being entered into a prize draw for a year's supply of John Smith's Extra Smooth Bitter.

A party spokesman said: "The questions are easy enough, apart from the Clegg one, but I'm not allowed to give away any clues."

Before Clegg's keynote conference speech, polling showed 40% wished he was Peter Sallis, 25% said he was definitely in The Wrong Trousers and the rest said he was an old Yorkshire word for the bits of dung you see hanging off the back end of a sheep.

The spokesman added: "As I keep saying, we are the Lib Dems, so it really doesn't matter."