ACUPUNCTURE is extremely effective at making tiny holes all over the body, the biggest ever study of the ancient Chinese remedy has revealed. Researchers commissioned by the Acupuncture Society tested the needle-based complementary therapy on 2,000 patients, all of whom reported small holes in their skin after treatment.

The Institute for Studies then gave a control group of 2,000 different patients no acupuncture at all, after which they were examined and found to be entirely hole free.

Report author Henry Brubaker said: "If even one patient given the needle treatment had come back without a hole I might have had my doubts, but this shows that acupuncture works.

"As you can see, when the needle is pushed into the patient’s skin it breaks through the outer layer and so creates a tiny hole. But even after you remove it, the hole remains. Still think it's all in the mind?"

Julian Cook, president of the Acupuncture Society, welcomed the report as a major piece of scientific research and excellent value for money.

He said: "A report came out last week that said acupuncture is no help whatsoever if you are trying to get up the duff. Call that science? What about China?

"Those guys are pumping them out so fast they have laws against it. Ever tried counting them? All you need to do is show a Chinese woman a needle and she’s pregnant. You don’t even need sperm."

Women Bishops To Fill Cathedrals With Knick-Knacks And Pot Pourri 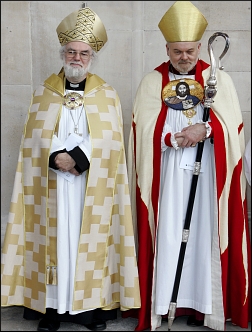 FEMALE clerics have vowed to fill England's great churches with stupid little knick-knacks and bowls of pot pourri as soon as they become bishops. Bishoping is a manly business

The Church of England general synod last night voted to consecrate women bishops despite warnings the nation's finest cathedrals would soon become all scented and frou-frou.

Reverend Emily Jenkins, a curate from Somerset, said she was looking forward to buying new curtains and some plug-in air fresheners when she takes over at Wells Cathedral.

Looking around the magnificent 13th century building, she said: "What this place needs is lots of velvet scatter cushions, some strawberry tea lights and my collection of little china hippos.

"And where's the curtains? If this was left in the hands of a male bishop you'd have roll-down bamboo blinds and a yukka plant – in a cathedral."

The Rt Reverend Julian Cook, a leading opponent of women bishops, said: "They'll just go round putting up pictures of tulips and daisies. What about some boats or an old steam train?

"And no doubt the loos will be filled with machines chucking out fanny-pads and such like."

But the Archbishop of Canterbury, Dr Rowan Williams, defended the move, adding: "For too long men have selfishly guarded the right to put on big dresses and talk about Jesus.

"It is time to let women put on dresses too."