A SURVEY of prescriptions written by homeopathic practitioners has found that 10 out of every 10 is riddled with unscientific garbage, according to a new study. Researchers found that many health food shop owners are having to rectify their mistakes by advising customers to visit a proper doctor instead.

Sample prescriptions found medicines such as 'shavings of Hogsfoot bark' and 'two drops of that blue stuff in the fancy jar' being recommended, with 30% throwing in a reference to 'temporal chakras' or praying to the river god Bento while wearing a hat made of ivy.

Helen Archer, an unwell person from Hatfield, said: "I'd lost a lot of weight, was having dizzy spells and had started coughing up blood. Unfortunately my homeopath wrote 'tincture of Elf Bane' on his prescription instead of 'for Christ's sake, go and see an oncologist'."

The General Medical Council has called for a standardisation of homeopathic prescriptions to avoid confusion, with all slips carrying the message 'you may as well eat this piece of paper'.

A GMC spokesman said: "An A&E doctor working 100 hours a week might make a goof and accidentally kill a patient by mistaking a bottle of pethidine for orange juice, which is perfectly understandable. If you don’t like it, I suggest you pay us more money.

"But, if a bearded man in sandals listening to a CD of whale intercourse charges you eighty quid for a bottle of water tainted by microscopic amounts of more water, well, you can see how that would be unacceptable."

He added: "If any homeopaths disagree, I suggest they mix up a tonic of one part my balls to three parts my big, fat, hairy arse." 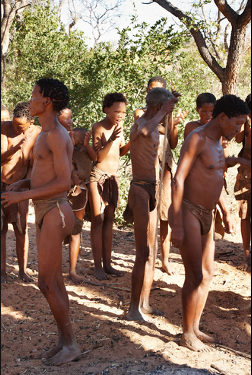 THE global search for a man who has not seen pornography has been abandoned after the discovery of a tattered copy of Knave stashed under a tribal totem in the South Pacific. Why do you think they're called 'bushmen'?

Professor Henry Brubaker, of the Institute for Studies, said: "We have opened a Pandora's Box of filth. Which is, ironically, also the name of one of my favourite sites. God, did I just say that?"

The Institute found that even in those areas of the globe without internet access, men have managed to access or create sleazy, debased images.

Professor Brubaker added: "Even the Kalahari bushmen, having first told their wives that they are off hunting large mammals, go off and create simple pornographic drawings in sand, using bits of dried bark for pubes.

"And despite their ancient way of life and their innate oneness with nature, these tribesmen still recognise the term 'shaven haven'."

Professor Brubaker admitted the quest for a porn-free male was finally over when the Institute discovered an unnamed tribe who worship driftwood living on a previously uncharted archipelago.

"The people seemed completely innocent, open, untainted by facsimiles of deviant sex acts. That was until we found a very well-thumbed copy of the Knave 'Girls of Summer Special 1987', buried under a makeshift shrine. God only knows how it got there.

"Of course they all denied ever having seen it before, and then pretty much every male in the village volunteered to take it to the beach so that he could personally throw it away."