THE average school lunch box now contains at least three items that, technically, are not food, according to a new survey. Research has shown a marked shift away from traditional edible items to random pieces of brightly-coloured unidentifiable matter.

Professor Henry Brubaker, of the Institute for Studies, said: "Less than a decade ago, a cheap supermarket own-brand Penguin-equivalent chocolate bar was the least healthy item in the standard child's lunch box.

He added: "We tried giving some 'Robot Sam Fox Bulbs' to lab rats, and they ate each other's skin. So they're probably not very good for you."

However many children are staunchly opposed to efforts to make them eat actual food.

Nine-year-old Joseph Turner said: "Only kids who live on council estates, or are poor because their dad died in some tragic yet mockable circumstances, eat food.

"If I got a sandwich instead of a fox bulb I would probably get stoned to death at break time.

"I've already warned my parents that if they try it I'll tell the school nurse that dad touched me in the bath."

Parent Nikki Hollis added:  "I'd send my kids to school with a rabid marmoset in a hessian sack if I thought it would get them off my case for five minutes.

"This is real life we're talking about here, not some Waitrose advert bullshit."

Traffic Slows Down To Stare At Alastair Campbell 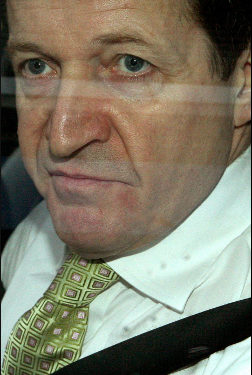 CENTRAL London ground to a halt last night as thousands of motorists slowed down to gawp at the mangled wreckage of Alastair Campbell. Traffic was queued around Parliament Square, up Whitehall and along the Strand, eventually causing tailbacks on the Holborn Viaduct, as Tony Blair's former spin doctor stood by every word of something that has been demonstrated, time and time again, to be comprehensively untrue.

Police used cones to establish a cordon around Mr Campbell as fire engines carrying psychiatric cutting equipment struggled to reach him through the gridlock.

Taxi driver Roy Hobbs said: "I didn't see any fire engines when I was stuck on Fleet Street. But even if they did exist, it would have taken them much longer than 45 minutes to get there."

And motorist Joanna Kramer insisted: "I don't think they could have done anything anyway. He was wedged really, really far inside this huge, twisted pile of demented bullshit."

Pedestrian Martin Bishop, who was forced to make his way home along Birdcage Walk, added: "The emergency services had arrived by the time I was walking past. I think I saw a psychiatrist standing over the wreckage, shaking his head and telling a fireman to cover it with a sheet of tarpaulin."

Eyewitness Tom Logan, a lawyer from Finsbury Park, said: "It was like it was in slow motion. All these words came tumbling out of the middle of his face and just went crashing headlong into this huge truck full of truth and sanity that was coming the other way.

Joanna Kramer added: "The police kept waving us on, but you know what it's like. When someone says they're proud of helping to start a massive war that was completely unnecessary, you try your hardest but you can't not look at it.