ICELAND has begun the search for a new supplier of thin slabs of gristle covered with a slice of processed yellow dairy product. My God, what if it happened here?

As McDonalds closed its Reykjavik restaurant, the tiny Scandinavian country has urged the United Nations to send emergency supplies of reconstituted bull's anus and thick, spongey baps until it can attract a new franchise.

Ingvar Edvaldson, Iceland's secretary of state for vomit, warned: "This is now a crisis. I have dozens of men sitting idle when they should be out there in their bio-hazard suits pushing great heaps of regurgitated mince into the nearest storm drain."

Thors Gudmundsson, Iceland's leading food critic, added: "Traditionally, Icelandic culture frowns upon non-cancerous colons so we really need something that will have us all shitting blood within a fortnight before our livers pack up and we get that lovely, fuzzy, diabetes-induced blindness.

"And it would help if the cheese slices could also be used in the construction industry or for wiping down the walls of the Keflavik whale-gutting factory."

Meanwhile Icelandic parents are concerned that the Disney Corporation will no longer be able to bribe them into stuffing lumpy handfuls of greyish-brown fat into their children's faces.

Johanna Hermannsdottir, a mother of two from Arborg, said: "My children desperately need a small, plastic, Chinese-made representation of a singing cartoon fish to accompany their McChrist's-sake-don't-ask-what's-in-it fluffy, chocolate-style object."

She added: "My children are almost too old to fall for this anymore. I may never hear them laugh and gag at the same time ever again." 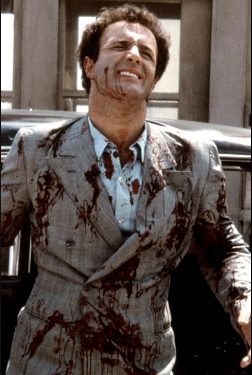 CREDIT card firms are facing a crackdown on practices such as leaving a horse's head at the bottom of your bed or killing you and then stuffing you in an oil drum. After years of bloodshed and sadistic violence the government is now urging the companies to go 'legitimate' by abandoning their brutal methods and investing all their capital in the Las Vegas casino industry.

The credit card companies, also known as the 'Five Families', exert a vice-like grip on thousands of British neighbourhoods where they run so-called 'numbers rackets' known as 'Visa Nostra' and 'Mafiacard'.

Each credit card 'family' has a rigid structure. Dozens of 'foot soldiers' report to local bosses or capos who in turn are answerable to the 'underboss'. The underboss and the consigliere or 'corporate lawyer' are the two closest advisers to the capo di tutti capo or 'boss of all bosses'.

Most credit card firms were founded in Naples or Sicily in the late 19th century, often growing out of militant political movements opposed to Italy's corrupt feudal system.

Stephen Malley, professor of financial history at Reading University, said: "These groups soon established their own power structures and it was not long before they moved to Britain and America where they set up as olive oil importers as a front for their complete and utter bastardry."

He added: "In the early days many of them considered going into prostitution or drug dealing, before rejecting them as nowhere near evil enough."

In a letter to Tom Hagen, consigliere to the Barclaycard family, Mr Brennan said: "Now you listen to me, you smooth-talking son-of-a-bitch. I'm gonna lay it on the line for you and your boss and I don't care how many dago guinea wop greaseball goombahs come out of the woodwork."

Mr Hagen replied: "Mr Barclaycard is a man who insists on hearing bad news at once," adding, "I'm German-Irish."