INTELLIGENCE chiefs believe Russia may be engaged in a complex double bluff after infiltrating the office of a Liberal Democrat MP. The Russians take allegations of this nature very seriously indeed

As Katia Zatuliveter, a researcher for Mike Hancock, faced deportation, MI5 sources said they have been up all night trying to determine what could possibly be gleaned from having access to something so irrelevant and annoying.

A senior official said: “We just can’t work out what they’re after, given that they must already know how to lie to students.

“There has to be something else, otherwise they may as well have placed a spy in the Macclesfield branch of Greggs.

“Perhaps they just desperately need top-quality information on how to be self-righteous, hypocritical fucknuggets.”

The source dismissed fears over Mr Hancock’s membership of the defence select committee, adding: “We have three types of information. The stuff that actually matters which we keep in a blue folder or leave on a train; the stuff we give to MPs, which is mostly receipts for Aston Martins and dinner jackets; and the random bullshit and magazine articles that we give to Lib Dem MPs.

“When Mr Hancock asked about the location of Britain’s nuclear submarine bases we told him they were all in Stevenage.”

The source also rejected claims the government was taking revenge for England’s failed World Cup bid, insisting: “If we really wanted to stick it to the Russians we’d restrict their billionaires’ private zoos to one snow leopard a piece and whack a 200% import tariff on lap dancers.”

Meanwhile there is also growing concern that the latest Russian spy suspect is only a six, or at best a ‘shitfaced seven’.

Martin Bishop, an IT specialist who studied in St Petersburg and speaks five languages, said: “She’s okay, but I fail to see how this photograph is going to use up three and a half minutes of my lunch hour.”

The New Adventures Of Joe 90 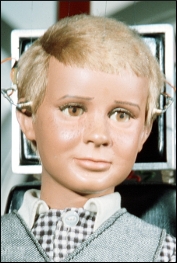 I was late getting up for breakfast this morning, although Dad never told me off because he wasn’t feeling very well. “Dad, why are you still wearing the same smelly clothes you went out in last night?” Dad seemed annoyed for some reason. “Could you keep the noise down Joe, I’ve got a bit of a headache this morning, thereâ€™s a good chap.” I think maybe Dad should go and see a doctor, because when Mrs Harris brought in some scrummy eggs and bacon, he vomitted loudly into the wastepaper basket. Later that day, Uncle Sam came round to see Dad. I asked him whether I was going on another top secret mission to steal the latest Soviet fighter from under their noses, when Sam said he had another ‘more important’ mission for me to complete. I was very excited as Uncle Sam looked me in the eyes and said: “Joe, could you go to the shops and get me 20 Lambert & Butler and one of those disposable lighters? Oh, and get yourself some sweets.” Dad also gave me some money to buy one of those magazines which are wrapped in cellophane and have a top secret video tape stuck to the cover. I expect Mr Khan will have to reach up and get it for me, as usual.

On the way to the shops I bumped into those horrid boys who go to my school. “Look everyone, it’s that four-eyed nonce who lives with the mad old alky in the big, posh cottage,” said Basher Briggs, their leader. “You don’t frighten me, you rotten bullies – if you lay a hand on me I’ll get my Uncle Sam onto you, him and me are both secret agents with the World Intelligence Network.” They all burst out laughing for some reason. “Shut up you little shit – if you really are a secret agent I’ve got a proper special mission for you: here’s twenty quid – now go and buy us some booze.” I explained to Basher that because I hadn’t had the brain patterns of an over-18 transferred into my head, the chances of me completing the task successfully were minimal. However, after he’d given me a dead arm and threatened to smash my face into a thousand pieces, I bravely decided to accept the mission.

When I got home a few hours later I found Dad, Uncle Sam and a couple of Chinese-looking ladies playing cards. “Aren’t you lot cold playing cards in nothing but your pants?” I asked. Uncle Sam seemed to get annoyed. “Sshhh! Joe, we’re in the middle of highly classified negotiations. Ooh, there’s the doorbell – one final mission before you go to bed – go and pay the pizza delivery man, thereâ€™s a good chap.”