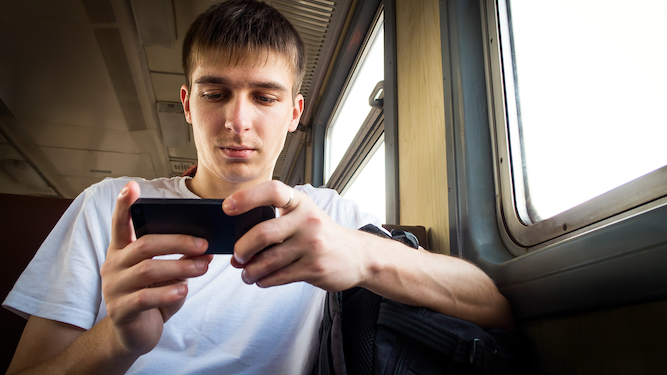 THE bulk of a man’s two-hour train journey has been spent staring at a mobile phone waiting for an internet connection, he has confirmed.

Tom Booker took a book and bought a newspaper for the trip from Manchester to London but ignored both in favour of irately checking his phone’s signal for brief windows of web access.

He said: “This is maddening. Why on earth can’t a metal box hurtling through largely unpopulated countryside at 125mph maintain a simple internet connection?

“No Twitter, no YouTube, no Tinder, none of it. No matter how frequently I cycle between them.

“I tried looking at the admittedly picturesque views, and just sitting back and relaxing which I never get a chance to do, but I was just so bloody irritated I couldn’t enjoy it and kept having to go back on my phone.

“Don’t get me started on the train wifi. It’s terrible, and you have to register and then they try and sell you all kinds of movies you don’t want. Not falling for that again. But God, this journey is dragging.”

Booker finally got a decent phone signal as the train pulled into Euston station, and caught up on the six tweets and two messages from a WhatsApp group he hates while waiting for the doors to open.