Humans Do Not Breed, Say Experts

HUMAN reproduction is invariably based on love and a deep longing to create something unique and beautiful, it emerged last night. 100% of young wildebeest mothers are ummarried

Experts confirmed that humans do not rut like beasts in a field, with the small-brained males injecting their semen into several ripe, willing females without regard for how the resulting offspring will be fed and nurtured.

Julian Cook, professor of reproductive biology at Reading University, explained: “Breeding is a term that can only be applied to animals who do not wear clothes or live in houses and go to the toilet outside.

“For instance, a typical male wildebeest will not take time to choose a single partner based on love and compatibility, but instead will simply indulge in a practice that I call ‘fucking’.

“He will mate with three or four females per season and, unlike a beautiful and unique human, the wildebeest will not have given any thought as to how the young will be fed. As far as he is concerned the savannah will somehow provide.

“These are the typical characteristics of what I would term ‘breeding’, whereas beautiful, amazing humans create each new special and extraordinary life from the merging of two souls immersed in a unique and glorious rapture that must surely be eternal.

“As I am sure you already know, every human baby that has ever been born glows with the billion stars of their parents love for each other.”

He added: “In all my years of studying reproduction I have never come across a human child that was the result of ‘fucking’.”

Professor Cook spoke out after Howard Flight became the 28th Evil Conservative peer this month to issue a humiliating apology for saying something unquestionably true.

Last week Lord Young tried to hang himself with his belt after cruelly pointing out that mortgage rates were relatively low, while Lord Finch-Hatton chose to bury himself alive after claiming that in his experience black people seemed to be a bit better at dancing than white people. 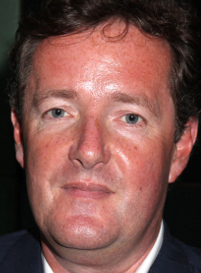 My job has taken me to every corner of the globe. Along the way I’ve met
the rich, the famous and have even had time to say a polite ‘hello’ to
ordinary folk, despite the fact that they can do nothing to further my career. And now this career – this journey – is about to project me into stratosphere, because I’ve just completed my new series: Piers On The Job. The title is typical of my robust sense of humour. It implies that every week you’ll witness me having sexual intercourse with a woman. If you’d thought that (which would be understandable as many, many women find me attractive) you’d be wrong, because every week I’ll be challenged to do someone else’s job.

The first episode sees me try my hand at stand-up comedy. My first ‘gig’ was at the Laughter Conservatory, and after a week of intense tutelage I stepped out and hit them with a series of observational ‘zingers’. “Don’t you really hate it when Ian Hislop puts sugar in your petrol tank after a recording of Have I Got News For You, causing irreparable damage to your Ferrari?” The great thing about English audiences is that they’re so incredibly polite and allowed me to complete my performance without making a sound.

I was then set the task of becoming an actor. Being someone who names George Clooney, Daniel Craig, Meryl Streep, Al Pacino, Dame Judi Dench and Steve McFadden amongst their closest friends, I think I know a little bit about ‘the craft’. In fact throughout Britain’s Got Talent, people were constantly asking me to ‘stop acting the c**t’, which I always took as a compliment because, of course, I’m not a c**t.

In truth I’m a humble man, so my final experience on this voyage has allowed me to demonstrate just how ubelievably humble I can be. My challenge was to live the life of homeless person. There are many people who say the homeless are a boil on our society that needs to be lanced, the sooner the better. Not my words of course, because, if you remember, I’m not a c**t.

I’ve been destitute now for 48 minutes. I’m cold, wet, tired and hungry – and what’s more, no-one has recognised me, despite the fact I was on television five times last week (111 if you count the repeats on ITVs 2, 3, 5 and 7). The grim reality is this – if I’m to survive these mean streets I am going to have to beg for money, offer sex to men who are not in my league, or seek a bed in one of those doss-houses that are owned by my close friend Lenny Henry.

I will prevail – I have always been a prevailer – and take strength from what my family, my friends, my wife and my agent tell me every single day: ‘People will watch absolutely anything on television’.