Life Can Survive On Arsenic And Produce A Newspaper, Say Experts The bizarre life forms are able to ingest the substance, poisonous to carbon-based life, and then use it to produce at least 90 pages of full colour newsprint, six days a week.

Nasa biologist, Dr Nathan Muir, said: “These creatures seem to be metabolising this high-strength poison which they then excrete through their anus in the form of printed pages.

“This faeces, also highly toxic, is then digested by other creatures at the bottom of the lake and their arsenic-ridden waste is then eaten by the organisms that excreted the pages, which is in turn metabolised and used to make more faeces, and so on.

“I call it the ‘circle of poisonous, shit-eating life’.”

He added: “If we examine today’s faeces under a microscope we can see a story about how England’s World Cup bid failed because it included a video that features lots of happy black children.

“This sort of poisonous excrement cannot be the result of a carbon-based biological process. Only by metabolising high-strength undiluted toxins at the bottom of a rancid, stinking lake can you produce a headline such as ‘Was this the video that cost us? The very un-English presentation screened to FIFA delegates’.”

The eye-watering stool sample also yielded a story about how Pete Doherty’s attempt to quit drugs has made him horribly fat and ugly and a story about how pedestrians walked past an injured pensioner, which experts stressed was a textbook example of the creatures’ poisonous faeces seeping into our DNA and making us all too scared to help each other.

Dr Muir said: “Ultimately what it means is that the universe could be teeming with planets that can support newspapers run by total fucking scum.”

England 2026 bid to be based on bribes and poison 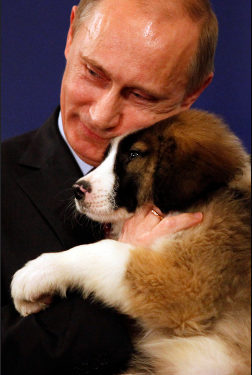 ENGLAND’S bid for the 2026 World Cup will focus less on youth development and stadia and more on backhanders and polonium sandwiches, it has been confirmed.

Mr Blatter has asked for his dog to be returned

As Fifa president Sepp Blatter announced Russia as hosts of the 2018 event, the Football Association stressed that next time it would simply hand out jiffy bags stuffed with crisp Â£50 notes along with the implicit threat of certain death.

An FA spokesman said: “We also realised we made a huge mistake bringing David Beckham and Prince William. Next time round we’ll just get Kenneth Noyes and couple of Barbara Windsor’s ex-husbands out on day release and let them do a bit of mingling.”

In Zurich, a delighted Russian prime minister Vladimir Putin said he was ‘very very surprised’ that his country’s bid had been successful adding: “So, so surprised. I really am very surprised indeed.

“I am also very pleased for Mr Blatter and his colleagues. They must be incredibly relieved. I know I would be.”

Shortly before the voting began the Russian FA ordered a waiter to offer round a tray of exotic fish paste sandwiches while Mr Putin stood behind him glaring menacingly at each member of the voting committee.

He then asked each of the Fifa officials if they were voting for Russia and if they hesitated or said ‘no’, Mr Putin immediately replied: “Take sandwich. Is good.”

Russia’s winning presentation used state-of-the-art computer graphics to depict each committee member cruising along the French Riviera in a Bentley Continental alongside a large-chested blonde woman who was clearly attracted to them, to the strains of Beautiful Day by U2.

But the presentation came to a sudden and dramatic climax with a large, black-bordered photograph of former KGB agent Alexander Litvinenko lying in his London hospital bed, accompanied by the opening bars of Beethoven’s Fifth Symphony.

Mr Putin then took to the stage and said: “We will also build some stadiums and have trains.”

England fan Tom Logan said: “I’m gutted for England but I’m also looking forward to going to Russia, having something slipped into my drink, waking up in a basement and told that I have to marry someone’s sister and take a load of heroin back to Stevenage or they’ll shoot my mum.”