Typical lavatory door designs in bars now include a snake and a butterfly, a sock and a can of peaches or a swirly pattern and a pointy pattern instead of the words ‘men’ and ‘women’.

Professor Henry Brubaker said: “These signs are both a trap for the unwary and a free pass for perverts.

“They’re typically used by the sort of drinking establishments that ‘don’t do crisps’, in order to make themselves look sexy and hip in a way that is pleasing to people who own glass furniture and use the word ‘lifestyle’ in everyday conversation, but is irritating to actual humans.

“We’re seeing a huge rise in people urinating into their hats and handbags because they can’t decipher whether a dragonfly or a piece of ham is more representative of their genitalia.”

He added: “Another minefield is toilet signs using foreign words, especially made-up ones like ‘Senorininos’ and ‘Peccorillams’.

“Cryptic puzzles are fine in newspaper crosswords but less welcome when you desperately need to empty your bladder without being banged up for indecent exposure in what turns out to be the ladies’ powder room.”

Office worker Stephen Malley said: “Last night I stood for three hours in the corridor at Ironic Sounding Bar Name in Soho, trying to figure out whether my penis looks more like an orange or a kumquat.

“Eventually I just gave up and pissed myself. Everyone thought I was really edgy and cool.” 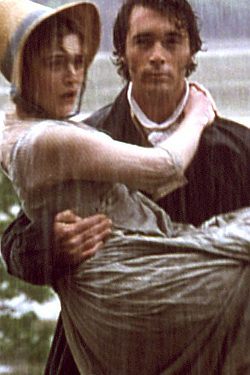 Eve Branson, one of the much-admired Branson sisters, slipped and fell during a beastly fire only to be swept up in the arms of the commanding Ms Winslet.

The handsome actress carried Eve to safety before commenting that one so dainty should perhaps take more care when one’s luxury Caribbean home is struck by a most fearsome lightning bolt.

As her younger sister giggled in the background, Eve replied: “Truly Ms Winslet, I fear that my heart may have been struck by the same lightning bolt.”

Eve is understood to admire Ms Winslet greatly and is in awe of her outspoken views on poetry, music, art and love.

But her sister Elinor remarked: “Ms Winslet is truly a woman of courage and not insubstantial handsomeness but I fear she may not be all that she seems.

“I took the precaution of re-viewing her Academy Award acceptance speech and was forced to conclude that your suitor possesses a degree of self-absorption that our dear, departed Papa would have described as ‘ghastly’.

“I beseech you sweet, precious Eve, take the very greatest care of your heart as I would be loathed to see it broken when Ms Winslet has to spend three months on the set of an Ang Lee film about Jack the Ripper.

“And I don’t know whether you noticed but Ms Winslet has two children. No good can come of this.

“Next time there is a fire do try and get yourself rescued by Alan Rickman.”