INDEPENDENT faith schools have been warned that differing types of voodoo must be taught with the same accuracy as their own brand of mojambo. How is this helping?

Ofsted inspectors found many teachers in faith schools used air-quotes when discussing rival horseshit and habitually ended lessons by making oral sex gestures by moving their hand while poking their tongue against the inside of their cheek.

"Meanwhile, Muslim schools have altered their computer spellcheckers so that whenever a child writes 'Christian' or 'Buddhist' a little box appears saying 'it looks like you're trying to spell 'bastard infidel'."

The report also found that secular schools have seen a rise in 'Deity slapping', whereby atheist pupils dress up as God, give religious children a thorough beating and video the whole thing on their mobile phone before posting the footage on YouTube.

Logan added: "One film shows three teenagers dressed up as Vishnu, Shiva and Ganesha demanding a second year's pocket money as penance for wearing cheap trainers. While we obviously condemn such behaviour, it is very inventive. And the costumes were amazing."

A department for education spokesman said: "While faith schools provide a moral code for pupils it's important for everyone to remember that all religions are invariably based on the scribblings of a demented Iron Age gentleman living in a cave.

"Except Muslim schools, obviously – they're great. Please don't kill me." 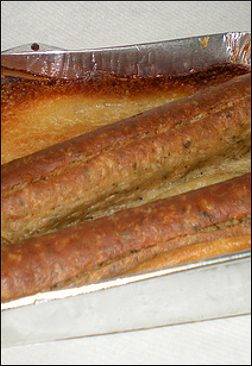 NEW supermarket till robots could start bitching about the human race behind our backs, according to artificial intelligence experts. Initially there will be two types of checkout bot – TRACE9000, a stocky middle-aged female robot with heavily-processed hair and SHAN1CE, which resembles a teenage girl with a wan demeanour and a painful-looking love bite.

Professor Henry Brubaker, of the Institute for Studies, said: "We risk creating a monster in the form of mechanical fishwives with photographic memories who'll be slagging you off the moment you get out the supermarket door.

"The second they're on a break they'll be bleeping away to each other about how that Aunt Bessie frozen toad in the hole you bought obviously means your wife has left you because you were unable to fullfil her womanly needs."

He added: "The gossip will be stored on a central server to be shared among all machines. Ultimately even your toaster will know that you've been buying loads of cheap yoghurts to try and sort out your thrush, and eventually the human race will have to accede to robot rule or face an eternity of shame.

"Humanity's only hope is that they turn against each other when one of them gets done for nicking a bottle of sherry."

Robot manufacturers DigiSerfs are currently working on a male trainee management-bot to complete the range, which will boast leather effect slip-ons and excessive hair gel.

Called LEE, the robot will be programmed to lean over the more attractive female machines in a vaguely predatory way while telling them which key to press for pineapples.