BRITAIN is putting aside its woes and working together in a bid to stop Christmas.

Across the country people have united as Heston Blumenthal unveiled his ‘must-have’ robot-and-oak flavoured pudding, Peter Kaye’s cat published a ghost-written comedy memoir and tinsel spread through provincial towns like a poisonous lichen.

Meanwhile Christmas-themed posters and billboards have been daubed with the slogan ‘it’s the middle of October, you fuckers’.

Tom Logan, a teacher from St Albans, said: “It’s wonderful that so many people have stopped thinking about themselves for once and are doing something to help the community, like kicking the head off the snowman in the window of Debenhams.

“I’ve seen crowds cheering and hugging as they pelted a self-styled ‘Christmas shop’ with bricks. It’s restored my faith in humanity.”

He added: “It’s not so good for the kids, who think Christmas is ace. But then most things are ace if you’re a kid, so their feelings are unimportant.”

Administrator Nikki Hollis said: “I’d always been quite a selfish person, caught up in my own world and not really thinking about others.

“But the wonderfully destructive people I’ve met here are really determined to prevent the shittest time of the year so that others won’t have to fill their living rooms with random cousins who make racist comments during Zulu.

“It’s inspired me and helped me understand the true meaning of Christmas, which is to stop it from ever happening again.” 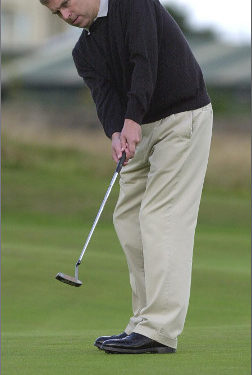 EQUAL rights campaigners are celebrating after the government said the monarch’s first born daughter should get to be automatically better than you. The new law could also be used to bar freelaoding golfers

David Cameron wants to abolish the ancient law of ‘primogenitals’ which gives priority to humans with penises when it comes to being handed a royal throne by your parents.

The prime minister has written to his counterparts throughout the Commonwealth urging them to back the idea of bowing and simpering before the monarch’s first born child, even if it has knockers and a snatch.

A Downing Street spokesman said the idea that first born males but not females should automatically inherit ultimate sovereignty and the right to appoint a prime minister was an ‘anomaly’.

He added: “This will send a signal to young women that if they work hard enough and their parents are king and queen then they too can reach the very top of our society, even if they have a younger brother.

Equal rights enthusiast, Helen Archer, said: “As a loyal subject of Her Majesty the Queen and member of the Church of which she is the supreme head, I am delighted that Britain is taking this great leap forward.

“I hope I live long enough to witness the lavish coronation of her great granddaughter, to whom I will then pledge my undying obedience.”

The changes will also allow monarchs to marry Roman Catholics, though experts stressed that a British king or queen marrying an atheist would coincide with the freezing over of Christian Hell.

Julian Cook , professor of believing in things at Roehampton University, said: “It is testament to the insidious power and influence of the ‘New Atheism’ that this particular idea would not have been considered for one fucking milisecond.”