Everyone goes mental for strangers’ wedding

TERRIFYING numbers of people are going nuts on the streets of England because two people they’ve never met are getting married in a big church. She's the one on the right

Despite never having spoken to the newlyweds or even seen them in three dimensions, the whole shebang is a massive deal to millions of people because one of them was born in a castle, with dungeons and everything, to a family who have been rich for a very long time and the other one looks nice.

Divorced welder Tom Logan, who has been voluntarily sleeping in a tent in a London street because of all this, said: “I can’t believe how amazing this is. Definitely worth living in a gutter for nine days drinking my own recycled urine to see a fleeting glimpse of what was either a gilded carriage or a recycling lorry.

“This is the best day of my life, other than when I discovered my own reflection wasn’t an evil ghost.”

All around the country semi-compulsory fun is being enjoyed by large groups of easily-amused individuals, united by their shared enthusiasm for wealthy people.

“Some people say the wedding is probably a nice thing for the people getting married, who seem pleasant enough, but overall they aren’t any more bothered about it than the Windsors would be if they got hitched.

“To which I say, you’re entitled to your opinion but you hate England and everything in it and should be torn apart by rabid bulldogs in a mess of exploding entrails.”

Typically strange-looking commentator Stephen Malley said: “To people who don’t like this sort of thing, I say: George Orwell liked it, he was cleverer than you, so fuck off.”

The land mass popularly known as Great Britain, on which the wedding is taking place, said: “Being a massive inanimate thing without arms or eyes, I have been unable to see the pictures of Kate looking pretty in Hello! and thus get worked up about it all.

“Personally I think the best thing about me is my 700 soil types.” 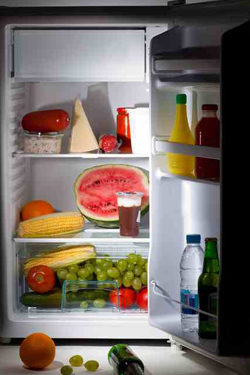 ACROSS the country, British people are readying themselves for a once-in-a-lifetime fridge-cleaning moment. We can make this better

There are few occasions in an everyday working person’s existence when they seriously consider getting all the crud out of the fridge, putting the really rank stuff into a plastic bag, and then giving it a really thorough wipe down with a bottle of squirty cleaner.

Perhaps even removing the particularly scuzzy see-through drawers, and leaving them to soak in the sink.

For most of us, simply ordinary folk whose lives are seldom touched by mouldy onions and multiple jars of out-of-date curry paste, the days when doing all this seems appealing are very few, and so very far between.

But this Friday is one of those days.

It is a moment in history when a nation united by not being at work and a lack of normal television will stand up, chests inflated with pride, and say ‘I might as well have a go at the fridge. Does nan want a cup of tea while I’m up?’

Remember it well, that you might share with future generations the fond memory of its cleaning-based magic.

Plumber Stephen Malley, just an ordinary honest, working family man from Tunbridge Wells, said: “It’s funny, I never thought of fridge cleaning as something that was relevant to my life. I guess you’d call me a white goods hygiene refusenik.

“But there’s something unique and very special about this Friday that has spoken to me on a very human level and made me go and buy some scourers.”

He continued: “I will remove items including the mozzarella ball I bought nine months ago with the vague aspiration of making a nice salad, the old leeks that are starting to decompose, and the tub of Utterly Butterly that for some reason no one has ever thrown away despite it very evidently being empty.

“I will do this, and then I will use hot water and chemicals to make the inside of the fridge good again.

“And I will feel proud.”

He added: “I might even have a go at the oven.”