I Do Not Love The Ginger Ones, Says Santa

SANTA Claus last night condemned ginger haired children, insisting they freak him out and will never be welcome at the North Pole. The rabbit had to be destroyed

Santa issued an angry statement after it emerged the supermarket chain Tesco was selling Christmas cards claiming he regarded ginger children as being equal to other kinds of children.

He said: "I want to make it absolutely clear that I do not love the ginger ones. In fact, I hate them. They make me physically sick.

"Whenever I see one I get totally creeped out. It's like their little ginger fingers are crawling all over my body. And they smell absolutely revolting.

"Occasionally one of them will wake up during the night and I'll drop down the chimney only to find myself face to face with this abomination.

"They give my reindeers the most appalling diarrhea and the elves suffer from horrifying, vivid nightmares which, as I'm sure you can imagine, leads to some very disturbing toys.

"Couldn't we make them all go and live on the Isle of Man or something? Or what about Wales? That would certainly make me a lot jollier."

But Davinia Phillips, a mother of three gingers from York, has complained to Tesco insisting the card contravenes her right to have everything exactly the way she wants it all the time and to never be annoyed by anything.

Santa added: "Everyone knows that if you hug a ginger child it will explode." 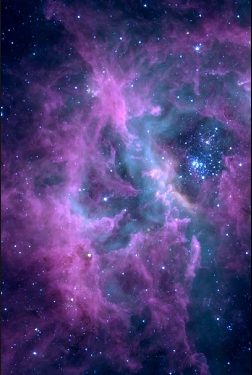 THE Hubble telescope has captured images of an enormous galaxy made up entirely of pornography, astronomers have claimed. The Strachan-Nutkins Belt. You have to squint.

A team of scientists, including physicists, astronomers and a strange, sweaty man you would not want to leave your children with, claim the galaxy could be the filthiest ever observed by mankind.

Professor Nathan Muir, said: "Until now we always believed the Strachan-Nutkins Belt was the grottiest cluster in the known universe, but this has a star that seems to be made of old copies of Back Door Beauties. And that's wrong, even at a sub-atomic level."

The Strachan-Nutkins Belt, discovered in 1992, was named for its resemblance to schoolboy masturbation-fodder Michaela Strachan and fellow Really Wild Show presenter Terry Nutkins at the tail-end of a Shanghai Two-Stroke.

It remains the only 300 light year-wide collection of gas and ice to be included in the Youporn.com Hall of Fame.

"We've checked and re-checked the data and what we have found is something truly unique. Very rarely would the Milky Way give me a roaring hard-on, but I certainly board the rocketship to Bonerville every time I check this one out."