Is It Ethical To Burgle A House If It Belongs To Ben Fogle?

BEN Fogle has foiled an attempted burglary at his home, re-igniting the debate over what you can and cannot do to the TV presenter. It's not alright to put a weasel in his sleeping bag

A gang of four men attempted to force their way into Fogle's house in an attempt to take some of the things he had purchased with the proceeds from TV shows such as Fop Trek, Chimp Inoculation and Chimp Inoculation: Xtra.

The would-be burglars were interrupted by Fogle, who chased them down the drive while pelting them with pate and labradors.

But the incident has revived the ethical and legal debate about how far members of the public should be allowed to go if they encounter Ben Fogle.

"Ben Fogle is human too, perhaps not like you or me, but you can't just rob his house, throw owl pellets soaked in cat piss at him or chase him with a claw hammer. It does seem unjust, but there you are."

Plumber Tom Booker said: "I'd always assumed that you could do pretty much whatever you wanted to Ben Fogle. I'd always fancied using a crane to drop a huge sack of rotten crabs on him from abot 200 feet.

"I'd certainly never imagined you could be convicted in a court of law for such behaviour – isn't there something called 'The Fogle Defence'?"

Landlady Mary Fisher said: "Ben Fogle came in here once. The regulars pinned him down and stuck earthworms up his nostrils while he begged and pleaded like a big posh baby.

"The police came in because of the screaming and we were like 'but it's that Ben Fogle off the telly' and the copper just tipped us a wink and said that everything seemed to be in order. I love this country." 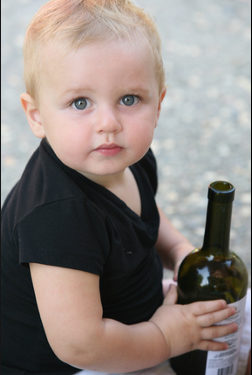 In his first outburst since talking shit about swine flu, Sir Liam said middle class people in Britain are spending up to 70 hours a week devising new methods for getting wine into their children.

He said: "Working class people who drink all day and make no attempt to raise their children are obviously not the problem. It's the middle-classes and their obsession with trying to understand how their children think and feel while slipping some Muscadet into a big jug of Ribena."

Sir Liam said there was evidence middle-class children will grow up to have wine with their meals, plus a few gin and tonics or a couple of bottles of real ale, especially at the weekend.

"If the middle class continue with this obsession, our country will be filled with reasonably well educated, well mannered people who are gently pissed most of the time."

He added: "What evidence? I'm the chief fucking medical officer, that's what evidence."

Helen Archer, a mother-of-two from Grantham, said: "I'd love to answer your questions but I need to get home and add some Chianti to my three year-old's mashed chicken and carrot before In the Night Garden comes on. He absolutely has to watch it pissed."

Martin Bishop, an accountant from Peterborough, said: "In our house we have a strict timetable. Homework, supper and then wine tasting from 8pm until about three in the morning. After that it's two or three brandies and then it's straight off to bed."

He added: "My 12 year-old has had to give up trumpet lessons until he can talk me through the finer points of a Semillon Chardonnay from the Bergerac area of the southern Dordogne. That boy will learn even if I have to take a stick to him."

Bill McKay, an architect from Doncaster, said: "It does sound as if he's talking shit again. Not only that, but he's ignoring the vitally important point that drunk children are much funnier and more interesting.

"Most of the time my 15 year-old is a miserable, self-absorbed little tit. But give him three glasses of Cloudy Bay and he'll do an incredibly bad Shakin' Stevens impersonation. It's better than Midsomer Murders."