A SPECIAL working class-themed private school has been established for the children of Labour MPs worried about social inequality. St Katona's will be the first fee-paying school with downwardly-mobile aspirations, where pupils are encouraged to watch ITV and eat deep-fried chicken with baked beans that come in a plastic pot.

Headmaster, Wayne Hayes, said: "We have been established to service Labour MPs and Guardian columnists, who want their offspring to grow up as idealised working-class caricatures but are too scared to send them to state schools, where they would be beaten to a pulp by the burly, shovel-wielding children of unemployed foundry workers."

Teachers are referred to as 'mate' or 'geezer', while girls are required to have at least one abortion by the age of 14.

Labour backbencher Carolyn Ryan said: "St Katona's fills a vital gap in the market for people like me, who are strongly – well, fairly strongly – committed to leftist, socially egalitarian ideals while simultaneously aware that state-educated children have a tendency to stealing and illiteracy.

"Without it I would've had to pretend my eldest had some bullshit syndrome involving prime numbers and the letter 'h' as an excuse for sending him to Rugby, instead of the local comprehensive that looks like a nuclear bunker and smells like stale pies."

She added: "As it is, I'm very pleased with his progress at St Katona's. After just one term he's talking like Brian Glover in the film version of Kes, which is a joy at dinner parties." 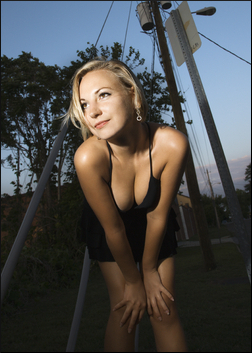 STOCK markets plunged today after President Obama unveiled a far-reaching crackdown on banks that will leave your overdraft exactly as large as it is now. Mr Obama, who set out his radical plan in response to excessive Republican voting in Massachusetts, said banks must be broken up into a series of smaller and more risk-averse institutions that will continue to bleed you like a slaughtered pig.

He added: "I am ready for a fight. People need to have faith in the financial system they are going to be indebted to until the day they die."

Tom Logan, chief economist at Madeley-Finnegan, backed the reforms and stressed that everything got much worse in 1999 after President Clinton decided that banks were allowed to do two slightly different things at the same time.

He added: "Obama's bold move will finally take us back to the 1970s, which was of course an age of low taxation, high living standards and full employment, as well as thousands and thousands of great big bouncy titties everywhere you went."

In the UK both Labour and the Conservatives have pledged to follow Obama's lead and introduce similar reforms that they insist will make everything better for ever except your overdraft.

But Julian Cook, chief economist at Donnelly-McPartlin, said: "It is worth pointing out that our public finances were fucked squarely into a cocked hat long before Northern Rock dropped its rusty, overflowing shit bucket.

"I'm not exactly sure when we ran out of money. It was either the £26 billion that was wasted because the government doesn't know how to buy a computer, or it was shortly after Gordon Brown created the one millionth pointless local authority job for people with worthless degrees from the University of I Can't Spell.