Schools Told To Watch Out For Exploding Five Year-Olds

TEACHERS across the country were last night told to be on the look out for exploding five year-olds. Education secretary Ed Balls said Britain's tiniest children have never been more dangerous and extreme and warned it is only a matter of time before year one infants start going off.

He added: "A useful exercise at the beginning of the new school year is to ask all the pupils what they did on their holidays.

"If any of them spent two weeks at a training camp deep in the Hindhu Kush you should probably have a word with the parents."

Jane Wilkinson, a primary teacher from Bedford, said: "Last week I said 'good morning' to my class and, as usual, they all replied in unison 'good morning Mrs Wilkinson' apart from Kyle Stephenson who shouted out 'Allahu Akbar!'. He's never done that before.

"I immediately told all the other children to find a partner and leave quietly. The police have now placed a cordon around Kyle at his desk.

"They've given him some Lego and he's working on a detailed model of Canary Wharf."

She added: "I remember about 20 years ago I had a little Irish boy in my class but all he really did was deal drugs and hit the other children very hard on the knees with a baseball bat."

Does Alistair Darling Have What It Takes To Run Seventeen Banks At Once? 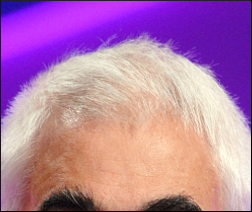 CHANCELLOR Alistair Darling was said to be nervous and excited last night after being told he would have to run 17 banks at the same time. Mr Darling, who has no previous experience of running a bank, has opened a new Word file on his computer and has already typed some headings in block capitals.

The chancellor said: "Barclays – now that's quite a big one isn't it? Right, so that'll probably need all of Monday.

"Nationwide I can do Tuesday mornings. I'll split Wednesday between Lloyds and Abbey. HBOS is fucked so that'll need all day Thursday, and I can do the rest on Friday. Should be finished by half-four."

He added: "Worst comes to worst, I can always take RBS home with me and fiddle about with it in the garage."

City analyst Julian Cook said: "I believe British banking is about to enter an exciting new era of dreadful speeches, lost CDs and changing its mind every 20 minutes."

Meanwhile, as the FTSE 100 continued to fall despite the £500bn pound cash injection, stockbrokers finally admitted they have not been completely honest with us.

Martin Bishop, a senior trader at Madeley-Finnegan, said: "Yeah, okay, basically what happened was last Christmas we all got shitfaced and ended up throwing £800 trillion into a volcano.

"It was all Fred Goodwin's idea. He's mental."