Jacqueline Davies said there was now clear evidence that Mr Coyote intended to commit murder and should be arrested and held on remand until a trial date can be set.

But lawyers for Mr Coyote said that not only had his early attempts to use the crossbow ended with him smashing head-first into a cliff, he was also just a cartoon.

Stephen Malley QC said: “My client  – and the alleged target of his aggression – are the result of thousands of individual drawings which have been photographed and then screened in rapid succession.

“We are sure that if the court watches all 48 of Mr Coyote’s adventures in their entirety it will become apparent that not only is he unlikely to commit the murder, he was never supposed to.

“Additionally, the series of unsuccessful purchases Mr Coyote makes from the Acme Company underline not only his inability to commit the murder, but suggest that my client and his alleged target are merely the subjects of some short, animated films in which the normal rules of physics and biology are suspended.”

But Judge Davies said: “The nature of Mr Coyote’s existence and the efficacy of his methods are both irrelevant. It is his stated intentions that have brought him before this court.

“And if counsel insists on maintaining the position that a cartoon character is somehow physically and psychologically incapable of attempted murder, I would urge him to examine my summing up in the Crown versus Fudd.”

Glastonbury To Be Powered By Jugglers 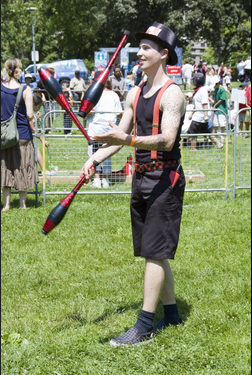 ENERGY for next year’s Glastonbury festival will be provided by a troupe of electromagnetic circus performers. The floppy-hatted morons will be kept in a series of pens with manky falafel being pumped into wicker troughs from a nearby catering van run by a dreary cannabis addict.

Small magnets will be attached to their stupid, constantly flailing arms which, in just six hours, will generate enough power for one face painter to boil the water needed to produce one cup of tea that is made from grass and tastes like asparagus-tainted urine.

Meanwhile the falafel-induced flatulence will be piped back into the catering van and used to cook more falafel in a repellent, malodorous circle of life.

Glastonbury obergruppenfÃ¼hrer Michael Eavis also hopes to one day be able to generate energy from the overwhelming sense of anger and disappointment experienced by festival goers over the age of 35.

He said: “By the end of the weekend the air is positively crackling with it.

“All these solicitors and marketing executives who thought they were in for a few days of crazy freedom but end up being covered in their own mess and filled with hate towards everyone within a five mile radius.”

After the festival all the jugglers, unicyclists and mimes will be recycled as fertiliser, although Eavis warned it could make the resultant crops taste a bit like grimy tosspot.

He added: “Becoming carbon neutral is what we’re all about and I hope the 150,000 people from around the world that travel here by plane, car and decrepit camper van will appreciate all those bands who made the effort to get here by helicopter.”