BRITAIN will be a prehistoric barter economy within two years, the Bank of England has predicted. Leisure time will be spent drumming in the dark

The banks latest projections show that negative growth and the collapse of the eurozone will create an economic system based on flint axes, chickens and shiny stones.

Bank of England governor Mervyn King said: By 2014 job and mortgage worries will be replaced by concerns about fighting rival tribes with spears.

And youre not going to have time to update your Facebook status when a wolf has just stolen your baby.

Chicken farmer Joseph Turner was upbeat about the collapse of society into violent, brutish chaos.

He said: Ive got 200,000 scabrous hens packed into my stinking warehouses, so basically Im going to be one of the richest men in England.

Unemployed builder Norman Steele agreed: Im six foot four and pretty tasty in a fight, so Im looking forward to the day when social status is determined by brute force.

“Then I will kill all clever people except the ones that make beer.”

Despite the gloomy predictions, King anticipates an improvement in the financial situation by 2050, with the introduction of gold coins and feudalism.

Joey Barton ‘based personality on Swayze in Road House’ 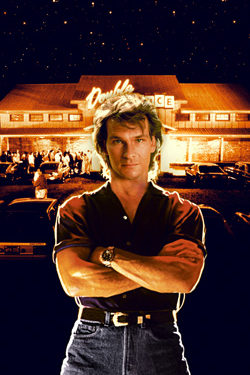 FOOTBALLER Joey Barton has confessed to stealing his philosophising tough guy persona from the lead character in the 1989 movie Road House. The film, regarded as a cult classic, stars Swayze as a professional nightclub bouncer and is famous for lines including ‘Nobody ever wins a fight,’ and ‘Be nice until its time not to be nice’.

QPR player Barton apparently saw the film on Channel 5 while at the Sporting Chance clinic and realised he could belt as many people as he liked if he came out with a few supposedly deep statements in between.

He said: It started at City when I got a red card and told the lads, Take the biggest guy in the world, shatter his knee and hell drop like a stone.

I thought theyd know it from the film, but Stuart Pearce nodded slowly like Id said something really wise and I realised I could get away with this.

You should have seen Alan Shearers face when I said I used to fuck guys like you in prison’. Although thinking back on it I’m not sure whether that was anger or mild arousal.”

QPR manager Mark Hughes said: Like most men, the only Patrick Swayze film Ive seen is Point Break so I thought Joey was quoting proper philosophers like Plato and Decartes.

The news is going to hit DJ Campbell the hardest, though. Hes just had Marcus Aurelius saying Pain dont hurt tattooed on his leg.