As Nigerian Umar Farouk Abdulmutallab was charged with demolishing his testicles on board a Detroit-bound passenger jet, security analysts called for all international airports to be fitted with exploding underpant detectors.

Tom Logan, of the Institute for Studies, said: "Be on the look out for things like ticking crotches or an unusual bulge. It may look like a courgette, a powerful erection or possibly even a packet of Fruit Pastilles strapped to the inner thigh.

"If you are sitting on a plane or a train and the man next to you has what looks like an engorged penis, you must punch him in the groin as hard as you possibly can and then blow your whistle."

The US and UK governments are now drafting emergency legislation that will allow police to stop people like you in the street and demand the immediate surrender of your trousers.

If you refuse, an underpant disposal robot will grab the waistband of your nether-garments and pull at it until the leg holes are half way up your back. Police sources said the waistband could even be pulled over your head, particularly in heightened security environments such as the Olympics or Trooping the Colour.

Logan added: "If at that stage your genitals do not explode, your underpants will be wedged so deeply into your bottom crack it'll make waterboarding seem like chocolate-coated hand relief."

Meanwhile Julian Cook, professor of Islamic Studies at Reading University, said Al Qaeda's new tactic seemed to be at odds with the theological underpinnings of militant jihadism, adding: "One suspects the 72 virgins are going to be somewhat redundant if you arrive in paradise having blown your own cock off."

The Adoration of the Magi 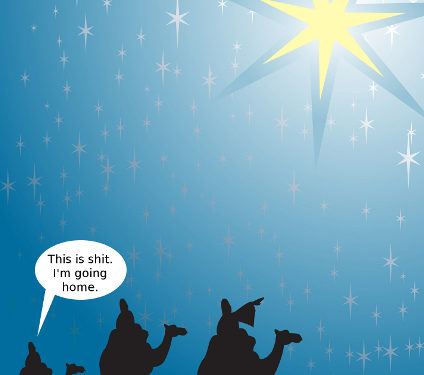