Army To Be Made Up Of Mythical Creatures By 2016

DEFENCE cuts could see Britain's armed forces being made up of Minotaurs, winged horses and nightmarish un-dead demons from Hellraiser, according to a new report. The Royal United Services Institute predicts that by 2016 the number of fully trained military personnel will drop from 175,000 to around nine or possibly 10, compromising Britain's ability to help America kill people who do not believe in Santa.

An MoD spokesman said: "If we could recruit a battalion of bloodthirsty Cenobites and train them in armed combat, they could do the same job as a normal soldier and then some.

"They're cheaper and have the added advantage that because they're technically dead, they can't be killed.

"Unless of course someone finds the solution to the Puzzle Box and sends them back to hell. In which case we're a tad fucked. Hypothetically."

But serving officers said human soldiers will be put at risk and warned it would be 'counterproductive' if the Army is 'watered down' with thousands of creatures not born of this world.

Shortly before the invasion of Iraq, the Royal Marines attempted to train a division of gargantuan Krakens, the notoriously temperamental sea-monsters that lurk off the Norwegian coastline.

Military analyst Tom Logan said: "Not only were they continuously moody and insubordinate, they would also destroy entire coastal towns on a whim and eat the battleships they were supposed to be protecting.

"Still, at least they don't keep going on about bloody helicopters."

Ferguson In Furious Row With Own Reflection 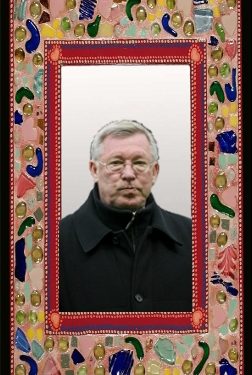 SIR ALEX Ferguson has ordered all the mirrors to be removed from Old Trafford following a blazing row with his own reflection. The argument begain after the Manchester United manager pulled faces at himself while shaving. Before he could lunge at the reflection with his razor, he was dragged away by assistant Mike Phelan, who sat him down on the toilet and gave him some chewing gum.

Ferguson said: "I've behaved terribly and I've really gone down in my own estimation. Until I have the decency to look myself in the face and apologise I'd prefer if I'm not in the same room.

"When I've won as many titles as I have, then I can try to eyeball myself like that. I'm a disgrace and I'll be reporting myself to the FA for calling myself that. Then again, I shouldn't expect more from the likes of me."

To ensure Ferguson does not have to confront his own face, every surface in the stadium has been repainted in a matte finish and bespectacled staff have been ordered to either wear contact lenses or place a bag on their head.

The Glazer family has also refinanced its £500m debt to buy a huge weather machine to deflect storm clouds that might dump dangerously reflective puddles into the manager's path.

Groundsman Charlie Reeves said: "The orbit of Sir Alex's eternally-incandescent strop has slowly wound down as the years have gone by and gradually turned itself inwards.

"Three years ago, he'd have a blue fit at anybody vaguely Scottish in the building, now he's having mingehuffs with his own reflection. Give it another 12 months and his lungs will start knocking shite out of each other inside his own ribcage."