Assange to escape from police at the top of some stairs

POLICE today said they expected Wikileaks founder Julian Assange to attempt an escape, probably at the top of a long flight of stairs. Following Mr Assange’s arrest, Metropolitan Police Commissioner Sir Paul Stephenson confirmed there would be nothing they could do if he broke free but then accidentally tripped and hit every step on the way down.

Stephenson said Mr Assange would be held for questioning at a central London police station but due to a problem with the central heating they would have to keep moving him between floors.

He added: “Unfortunately the lifts are going to be broken the entire time he is custody.”

He said: “I wish Mr Assange was not going to break his neck later this afternoon, but there is nothing my officers can do to stop him.

“They will shout something like ‘hey you’ or ‘stop escaping’ but he will be too quick for them.

“Also he will have forgotten to tie his shoelaces.”

Sir Paul dismissed claims that the arrest was political but admitted international warrants were controversial and that it would have been more efficient to use the British system of pretending Mr Assange is a Brazilian electrician.

Meanwhile governments across the world were celebrating Mr Assange’s arrest and imminent escape, stressing that history proves if you focus all your efforts on stopping one man then the thing you don’t like will just go away. 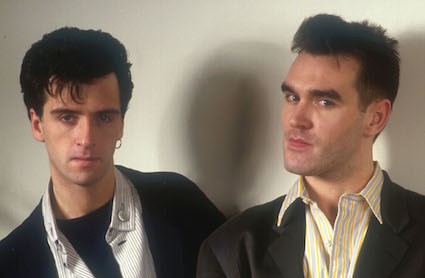 CLASSIC Smiths albums like Meat is Murder contain hidden pro-Tory messages only audible when the vinyl is played backwards.

Despite their anti-Conservative stance, many songs contain hidden messages including ‘scrap the NHS’, ‘God speed Mr Tebbit’ and ‘meat is delicious, especially if you shoot it yourself’.

Musicologist Emma Bradford said: “The Queen is Dead was originally titled The Queen Provides Continuity and Stability but EMI decided an anti-monarchist stance was more marketable to its key demographic.”

She added: “Many young Conservatives relate to the music of The Smiths. It captures that sense of alienation a young person feels when they’re sitting alone in their room and coming to terms with the fact that they’re 17 and a fan of Iain Duncan Smith.

“There’s also that feeling of bittersweet ennui, tinged with a rich ironic humour, that comes with crushing trade unionism and making nurses dance for coins.”