OSAMA Bin Laden would find himself at the sharp end of a £200 fine if he was tried in a British court, Cherie Blair said last night. Mrs Blair, who is actually a judge now, said the mass murderer would feel the full force of the law as it applied to people who believe in freaky sky magic and a massive, omnipotent super-being with glowing eyes and a beard the size of Texas.

She said: "Commissioning the murders of thousands of people is something I generally frown upon, especially when it is done by agnostics and so-called 'scientists'.

"But Mr Bin Laden at least believes most of the same things that I believe and knows that an all-powerful creator is watching over us, preventing wars and natural disasters with his all-embracing love and making sure complete maniacs aren't appointed to the bench in what is supposed to be a civilised country."

Mrs Blair stressed that until he started organising a systematic campaign of devastating suicide attacks against western targets, Mr Bin Laden had never been in trouble before.

She added: "Recruiting hundreds of disillusioned young men and training them to become mass killers is not acceptable behaviour, but he's a religious man and so obviously he already knows that.

"I would probably fine Mr Bin Laden £200, maybe even £300 if his QC was one of those posh bastards that turned me down before I met Tony.

"I'd let him pay it off at £7.50 a week, but it really depends on his other commitments.

"How much are bombs and stuff these days?" 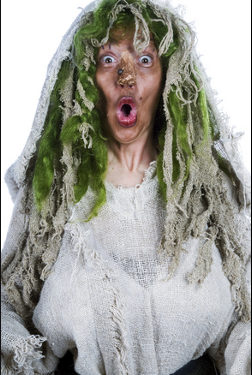 HAGS and crones will take centre stage in the BBC's spring schedule as the corporation announces a big increase in witch-themed programming. The move follows threats of a multi-generational curse from the British Crone Council, which represents gimlet-eyed, toothless old women who live in caves and speak in vivid and frightening metaphors.

Deputy director Mary Fisher, who claims to be 386, said: ''Tis be a shame there bain't no better programmin' for ladies such as I.

"Our dark sisterhood tires of endless reality dance shows. Where be the series in which crow-like harridans cackle mercilessly as they tell which combination of herbs and eldritch phrases can make a virgin pregnant with a donkey-headed abomination?"

Following the complaint and the first born son of the BBC's Head of Factual Programming being bitten by a talking stoat, the corporation has agreed to hand over BBC2's Thursday night schedule to crone-based programming.

A BBC spokesman said: "Wizened Women is a bit like Loose Women but the three hosts share a single eye, which they pass around so they can view the future of the celebrity guest and tell them exactly when and how they are going to die.

The spokesman added: "I am forbidden to speak further lest my tongue be split and my eyes dissolve in their sockets. You'd best be on your way now."