FANS of Tony Blair are today looking forward to a selection of his greatest hits, including Saddam Hussein Was a Horrible Man and the classic show-stopper 45 Minutes. Mr Blair will take to the stage in London for a one-off performance that fans hope will be a nostalgic celebration of his career-defining 2002 album The September Dossier.

Sources who have seen the playlist say he will open with the hard-driving, rock standard Iraq is So Much Better Off, before slowing things down with the quiet, soulful Halabja Massacre.

The former prime minister will then bring the crowd to their feet once more with the bouncy, bubblegum pop of We Don't Have to Take our Clothes Off (To Have a Regime Change).

Helen Archer, a Blair fan from Stevenage, said: "If September Dossier is his Sergeant Pepper then 45 Minutes has got to be his Lucy in the Sky With Diamonds.

"It's a work of pure imagination and the sort of thing you would think was written in a drug-induced haze, if you didn't already know that it was an obvious and deliberate lie."

A source close to Mr Blair said: "He's taken his cue from Bruce Springsteen and gone for a six hour performance filled with crowd-pleasing favourites that everyone can sing along to, rather than ignoring the audience and doing lots of rubbish new stuff that no-one wants to hear, like Van Morrison."

"And, while I don't want to get anyone's hopes up, I hear he's been rehearsing a grimey, funked-up remix of Tough on Crime Tough On the Causes of Crime with Tinchy Stryder and Missy Elliot." 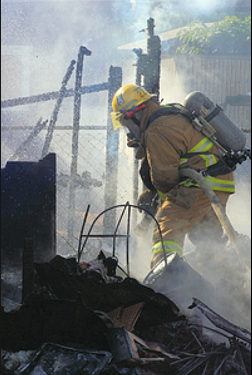 STEVEN Gerrard feels his living situation is heading in the right direction after his house finally stopped burning to the ground. The blaze had been ravaging the Liverpool skipper's home for several days as he tried to remember the right number for 999. Eventually, he had to call the police and ask them for help.

Gerrard said: "I think I've definitely turned a corner in having my house on fire and we can move forward from here.

"If you look at the amount flames reducing everything I own to charcoal now and compare it to this time last week, you can see the improvement.

"On top of that, it's been three months since the kitchen last sunk into a pothole and a good couple of years since the basement was haunted by the vengeful spirit of a murdered gypsy so these are all positive signs."

Gerrard was speaking after Liverpool's 0-0 draw with Wolves, which he described as 'the same thing as beating Barcelona 8-0 at the Nou Camp, if you look at this chart the gaffer drew up to explain this kind of thing. There's also a picture of a picture of a talking rocket on it for some reason."

He feels Liverpool can still achieve Benitez's promise of a top four spot by May but admitted he was not entirely sure which 'top four' the manager was referring to at the time.

Gerrard said: "If he means the Ukranian folk album chart then yes, we must be in with a decent shout.

"The gaffer says they're all witches and the ball is their cat."