THE FBI has issued computer generated images of what Osama Bin Laden would look like now, just in case you have seen him and not realised. In this one he looks a bit like Matthew Kelly

The first of the 'age-progressed' mugshots shows the Al Qadea leader in Western clothes and with the neatly trimmed hair and beard of a mid-afternoon, word-based quiz show presenter.

Meanwhile the second image shows him as the same old nutter, but with some grey bits and a new hat.

An FBI spokesman said: "Put one on your office notice board and stick another one on your fridge. And if you have time you could cut out a passport-sized one, laminate it and keep it in your wallet so that you can check if any of the people you encounter during the course of your day is Osama Bin Laden."

Denys Finch-Hatton, a retired company director from Stevenage, said he was sure the man in the photograph asked him for directions back in October, adding: "If you could kill him for me that would be excellent."

Helen Archer, from Peterborough, said: "D'you know what, I'm pretty sure he was married  to my sister for a couple of years. The beard was longer and he called himself 'Ian' but the hat is very familiar.

"If only I'd known it was Osama Bin Laden, I could have poisoned his chilli con carne or locked him in the downstairs loo until the fire brigade arrived."

She added: "Oh they broke up. He kept putting a large hessian sack over her head and switching off Casualty to lecture her about the cultural and theological rift between Shias and Sunnis. He was also terribly gassy."

And Roy Hobbs, from Peterborough, said: "Oh that guy, yeah. Saw him at the petrol station at Sainsbury's. He was filling up his car. I think it was a Fiat Punto. I thought to myself  'Al Qaeda can't be doing very well if he's driving around in a Punto'.

"I blame Amazon. How can anyone compete with those prices?" 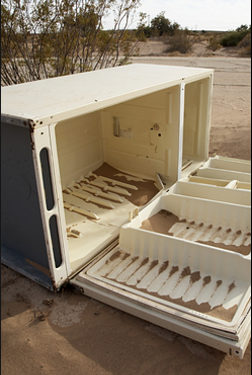 The Liberal Democrat leader and the author have traded insults since Clegg accused Ford of telling him to lock his children in a disused fridge and then push it off the back of a truck on a lonely road in the middle of nowhere, forcing the youngsters to find their own way home in the dark.

Clegg told the Sunday Times: "My wife and I would wake up in the middle of the night, put the children in the fridge and be heaving it onto the path before one of us would eventually say 'hang on a minute'."

But Ford hit back, urging the Liberal Democrats to purge the existing leadership through a series bogus accusations and show-trials before setting fire to the House of Commons and blaming it on some midwives.

Clegg said last night: "I'm not suggesting that Gina Ford is a Nazi, I'm simply saying that she looks a bit like Herman Goering. Or possibly Martin Bormann."

Ford is the multi-million selling author of a series of parenting guide books including How to Keep Your Baby in a Bucket and the controversial Go to Bed, Right Fucking Now.

Her strict methods call for babies to be signed in and out of their mother's breasts until they are 12 weeks old, after which they should be encouraged to get a part-time job.