THE government has banned the extremist group Islam4Uk, forcing it to change its name to Brian Thompson. Police will begin arresting Brian Thompsons like this one later today

Following a high-level inquiry by the Daily Mail, home secretary Alan Johnson said he had proscribed the organisation under a series of names it goes by including Al Muhajiroun, Beard Force and Anjem and the Hurricanes.

Mr Johnson said: "We can only keep Britain safe from terror by continually restricting the number of names these organisations have access to.

"By forcing them to be constantly ordering new stationery and car stickers we can ensure they have no time to say those horrid things that make the editor of the Daily Mail phone me from the tinfoil-lined, underground capsule beneath his garden shed at three o'clock in the morning."

He added: "Eventually they will be reduced to using an ever-changing sequence of numbers and not even the angriest young muslim man is going to want to join an organisation that doesn't have any words in its name."

Terror experts have backed the home secretary insisting the IRA was a legal organisation for much of the 1970s allowing it to not only carry out violent attacks but set up a chain of discount carpet warehouses and a frozen food delivery business.

A spokesman for Brian Thompson said: "We expect Brian Thompson to be banned within hours, so we have prepared a series of names to last us until at least mid-March including Phil Jackson, Barbara Evans and Big Jim Barker's Dixieland Jazz Quartet.

"Anyway, who's up for having loads of crazy opinions about stuff?"

Universities May Be Forced To Cut Media Studies And Hospitality Management 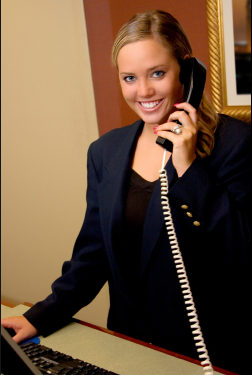 BUDGET cuts will mean Britain's universities will no longer be able to teach young people how to read newspapers and smile at tourists, it was claimed last night. Sarah has a doctorate in keyboard management

University leaders have warned that unless the proposed cuts are reversed Britain could soon have the worst trained public relations executives in the developed world.

Dr Julian Cook, vice chancellor of the University of Didcot, said: "In recent years we have been able to propel Britain to the top of the PR executive league table to the extent that everything in this country is essentially some form of public relations exercise.

"If we cut back now then we will deny an entire generation their dream of trying to mislead a journalist who has spent six long, hard years at university learning how to switch on a tape recorder."

Dr Cook, who has a Phd in the films of Chevy Chase, from Caddyshack to Goose on the Loose, warned that many of Britain's leading higher education institutions could be forced to teach science.

He added: "And I would like Lord Mandelson to explain how we're supposed to take less than three years to train hospitality workers to smile, carry things and not be a sullen, belligerent, moronic pain in the arse from the very second you check in.

"People are not born with a natural ability to smile and perform really simple tasks in exchange for money. It takes tens of thousands of pounds and a huge amount of public relations.

"Unless we maintain our current levels of investment, Didcot University's motto of 'Your Tomorrow Future Today Now' will soon start to sound hollow and meaningless."