MI5 Headquarters ‘In A Right State’

A FAILURE to recruit female operatives has led to
MI5’s offices becoming a complete tip, it emerged last night. You can't defeat Islamo-fascism without killing a few cheese plants

Senior intelligence sources warn that Britain’s national security is being compromised because important documents are getting lost under car magazines and stuff.

A source said: “The cleaners do their best to sort it out, but they’re scared to touch anything in case it explodes or sprays knock-out gas in their face.

“The cheese plant died in June and from where I sit I can see a Ginster’s wrapper on the floor. It’s right next to a bin but no-one can be bothered to pick it up.

“There’s no need for it to be minging. The underground complex where we keep all the fancy stuff is actually quite a nice space, but the only dÃ©cor is a poster for Back to the Future III.”

A senior intelligence operative who has foiled more than 20 bomb attacks this year, added: “I stare death in the face every day. You do the fucking dishes.”

MI5 chiefs are now hoping to recruit more female spies with offers of spa days and Topshop vouchers as rewards for successful espionage.

A spokesman said: “As well as having many excellent spy qualities such as empathy and perceptiveness, females are tidy and know how to brighten a place up with cushions that don’t explode.

“Apparently you can get a load of them from Ikea for about two quid.” 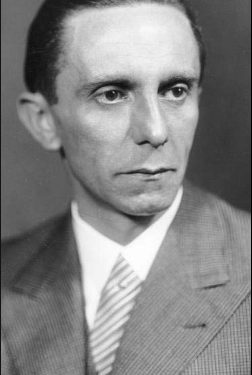 A GROUP of Labour MPs has written to the German government demanding a posthumous pardon for Joseph Goebbels. Oh look, you've made him all sad

The MPs have defied their party’s leadership and accused Germany of treating the late Nazi propagandist ‘unfairly’.

Julian Cook, MP for Darlington North West, said: “The way they dealt with Joseph was very unbalanced. They are riding roughshod over his right to appeal, just because he’s dead.

“I also think the Labour leadership should do the right thing and thank Joseph for the huge contribution he has made to the party in recent years.”

He added: “This is about democracy. It’s about making sure that people are able to say whatever they want regardless of how true it happens to be. Or have the courts decided that democracy means something else?

“And what message does this send to those of us who got into politics so that we could frighten people using nothing but the power of our imagination?”

But Labour deputy leader, Harriet Harman, refused to support the backbenchers, adding: “The Labour Party can never be seen to condone people who get caught lying.

“Apart from Peter Mandelson and all those times I told Pauline Prescott that John wasn’t covering his secretary’s tits in lukewarm chip fat.”