BRITISH troops in Afghanistan are to be issued with new uniforms that can disguise the fact they are armed with nothing but rusty tin-openers. The multi-purpose outfits feature pictures of a rifle and several hand-grenades designed to fool Al Qaeda troops into thinking allied troops have got real weapons that work.

"And we've also draped a large section of the material over our battle plans to hopefully disguise the fact we haven't the faintest idea what we're doing here."

The new pattern was developed to help troops blend in to the scenery, but Brigadier Finch-Hatton added: "There's only so much blending in you can do when you're white, speak English, have all your own teeth and aren't trying to stone women to death for having ankles."

Private Charlie Reeves said: "The rifle motif will allow us to shout 'bang' with greater conviction so that Johnny Taliban gets all frightened and runs away. I'm very happy."

Army chiefs are also exploring the potential of hi-tech 'scent warfare', where bombs smelling of Western decadence will be detonated over Helmand to fool the enemy into thinking Allied troops have won the war while they weren't looking.

Ministry of Defence sources say the bombs will be armed with the stench of alcohol vomit, Findus Crispy Pancakes and Katie Price laced with essence of Heat magazine. 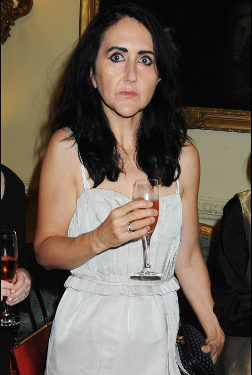 A CHARITY campaign for people spending Christmas alone has reminded them they could be with Liz Jones instead. The organisation, called It Could Be Worse, seeks to raise the spirits of those who find themselves single during the festive season by asking them to imagine being trapped in a remote country house with only the unbearable Daily Mail columnist and her awful cats for company.

An ICBW spokesman said: “Imagine sitting with her in front of a roaring fire as she bleats on about herself for days on end.

“Then one of her familiars – sorry, cats – would wander in and you’d think ‘thank fuck, here’s somebody else for her to talk at’.

“But then, somehow, the cat starts talking, going on and on and on about how difficult it is being a cat in this anxiety-fraught modern age.

“And you start clawing at your face in sheer desperation as she ignores your screams and launches in to a diatribe about her  ex-husband and how her rustic neighbours hated her just because she wrote a national newspaper column about how they all smelled of dead pigs.

He added: “Come Christmas day you’ll be on your own watching Thunderball with a glass of warm lager and a microwaved turkey-style dinner and thinking ‘thank Christ for that’.”

The campaign leaflet also offers a series of alternative nightmare Christmas scenarios, including being turned into a tortoise by an evil wizard and then adopted by Ben Fogle.