Damn them all to hell

Suspicions were aroused when four tonnes  of tinsel, crackers and Family Circle biscuit selection boxes were uncovered in a police raid on a Wolverhampton semi, believed to be an Al-Qaeda bolthole.

Security analyst Martin Crawford said: "It seems the terrorists are planning to distribute festive tat in shopping centres and public spaces, in a bid to create an even earlier start to the several months of the year collectively known as 'Christmas'.

"The British are a tenacious people who endured the Blitz and the IRA with scarcely a whimper, but the prospect of Christmas going on even longer than normal could finally break them.

He added: "The clocks haven't even changed yet. Those evil, psychotic bastards."

Ministry of Defence scenarios suggest an extended Christmas could trigger a kind of mass insanity, during which mothers would eat their children with brandy butter and neighbours would batter each other to death with stockings full of miniature Cadbury's chocolate bars.

Crawford said: "I predict that within days Al-Qaeda will attempt to hijack broadcasters and replace normal telly with interminable Rory Bremner specials and The Neverending Story played on a never-ending loop.

"As the situation worsens, with carol singers and laminated pub menus advertising 'Recession-busting Office Party Xmas Lunches for £9.99 a head', the British government will be forced to launch a nuclear strike against Britain, effectively committing genocide against its own people as a humane alternative to forcing them through an eternity of two-dimensional pseudo-cheer."

Crawford warned: "But even then it wouldn't be over, because any survivors would still have to think about New Year's Eve which, given the deadly radiation and everything, would actually be slightly better than last year's." 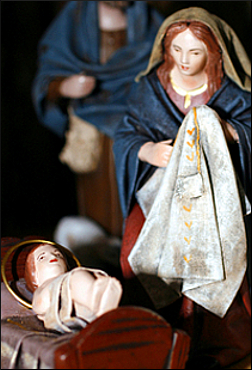 THE Pope has made an audacious bid for eight million worshippers in a move that has infuriated Anglican manager Rowan Williams. Pope Benedict has promised the incoming flock greater freedom to oppress anyone that confuses or frightens them and will unveil his multitude of new signings in St Peter's Square next month.

The Pontiff said: "They are a great bunch of guys and it will be a real boost to have them on the team. They bring with them years of experience in arranging jumble sales and hating science.

"And now they have the opportunity to not only help us pay off all the people we abused, but they'll also get access to our state-of-the-art range of pointy hats."

The new flock will begin training with head liturgical coach Archbishop Charlie Reeves once their applications for worship permits have been approved by the International Tribunal Of Churches.

Reeves said: "I'll be getting the cones of incense out and then we'll do some work on the basic sacraments, followed by half an hour of chin-ups and a quick game of leapfrog."

Anglican boss Williams has hit back by offering an undisclosed sum for millions of Muslims disaffected by 'racist beatings, constant explosions and the exquisite agony of denying yourself a bacon sandwich'.

But Pope Benedict feels his expanded crop of worshippers will see the church triumphant when the two denominations meet at the Last Judgement.

He added: "Unlike other religions, we can offer the best facilities for fidgety Anglicans who love to obsess over where people put their cocks."