Governor of the Bank of England

SO I barrels into the back room of No 11 and that swivel-arsed sock-banger Darling is sitting there in his nappy as usual, and the Mad Jock is standing over him with a cosh, looking for all the world like hes moved himself back in permanent. Cock. Thought Id seen the last of him, the shitting twat muffer. “Merv, Merv,” says Darling. “The markets have gone totally shit titters. Something called HBOS is off three billion while the Royal Bank is worth less than my MPs pension pot. Those bumrubbers in the Square Mile have gone totally nut fuckers. What are we going to do?”

“Calm down, calm down,” I says all soothing like. “Ive totally got it nipped. Big Larry and Steve the Psycho are, as we speak, in a van on the A1 and this time tomorrow theyll be on the side of Leith Dock frying up the last of that jocking shit tickler Goodwin and feeding it to a pit bull.

“Fat Ron and Reg the Butcher are in the Jag heading for Halifax. That jumped up shelf stacker Hornby has eaten his last can of baked beans. Hell be propping up the foundations of some swanky flat development, assuming the boys can find one that isnt totally arse pumped already. Sorted.”

“Shitting fuck tits Merv,” says Darling, whos now leaking so much dirty water its running down his legs. “We asked you to bail em out. Not take em out. Cant we just stick £500 billion into them like we said and make it all go away?”

“Five hundred bill?” I says, all slow and deliberate. “You really want me to pump five hundred large of my own money into the same pair of knobbing piss flappers that got us into this cocking shit fuck? What are you, a titting minge monkey? If these boys had listened to me in the first place and stuck their money into whores and drugs instead of hillbilly mortgages and credit default twats we wouldnt be in these beef curtains in the first place.

“And where Im supposed to get five huge today? I’m up to my flaps in IOUs already; if it’s not the slanty eyes on the phone asking for their money back, it’s the rag heads. Theyre worse than the fucking Jewboys in New York. When the phone rings now I put on a foreign accent and tell them theyve got the Star of Benghal, or get fat Sandra to tell them Ive broken my wrist and cant sign any cheques for a month.”

Now the Jock cocker steps in. “Its not your money, Mervyn,” he says, and hes got that look in his eye you normally only see if you mention that bum humper Mandelson. Brick shitters. “Its taxpayers’ money.”

“Oh,”  says I all calm. “Well thats alright then. I know, after weve shit the five bill down the plugger why dont we cock a few hundred mill of this taxpayers money to those robbing puffin fuckers and they can give it right back to our taxpayers who they stole it off in the first place. That told him. Titting shit flapper.

Any road up, better get myself spruced. Speaking to a bunch of hedge funds at the Mansion House tonight. Fanny dribblers. 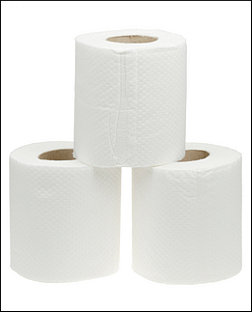 PEOPLE in the north of England refuse to use to toilet paper believing it will steal their soul, according to new research. Is this the work of a poltergeist?

Scientists say the fear of toilet paper means their hands gradually become covered in faecal matter until they look like they are wearing a pair of brown suede gloves.

When this is combined with the Northerners long-held fear of soap the result is a public transport system teeming with exotic diseases and reeking of undiluted human waste.

Ministers are now warning of a cholera outbreak on the Newcastle Metro system unless someone is able to convince the local population that Andrex is not a manifestation of the evil god 'Pazuzu'.

Bill McKay, a retired engineer from North Shields, said: "Everyone knows your soul lives just inside your bumshaft and that it loves the taste of toilet paper.

"My uncle Jim used toilet paper once. Overnight he turned into a zombie and went to live in Gateshead. He died 30 years later."

Mr McKay added: "Back Pazuzu! I do renounce thee! Thou will not tempt me with thy three layers of demonic quiltiness!"

A department of health spokesman said: "We're producing a DVD showing how toilet paper is made, including the use of sustainable forests, the bleaching process, the perforations between each sheet and even how they get it all onto the roll.

"At each stage we will have an interview with a reputable scientist pointing out the absence of soul-hungry demons."