'TELL me, how many times did you knock one out over Princess Margaret?' is the question I'd have put to Prince Philip if he'd ever been allowed to come on my show. Then I'd turn to the audience and say 'let's be honest folks – she got all the looks in that particular family, didn't she? And according to various sources, she could bang like the proverbial shithouse door'. And then I'd laugh and he'd laugh and everyone would go to bed happy. I am so proud of my time at the BBC.

Since announcing my decision to leave the BBC, I've been inundated with dozens of exciting offers. One of them is to co-host Channel Four's 300-hour Martial Arts Anime special with my great friend, Mr Quentin Tarantino. The event will include a never-before-seen home movie of Bruce Lee cleaning the top of the kitchen cabinets in his Hong Kong penthouse. Better than sex, that is.

Which reminds me of the hilarious time Quentin and Uma (that's Uma Thurman, actually) came on my show to plug the genius that is Kill Bill. After Quentin and myself had agreed that I possess a more comprehensive collection of Manga-inspired Kimonos and TJ Hooker memorabilia, I turned to Uma and asked her – as bold as brass – 'don't forget darling, if you ever get tired of old chinny here, you might like to take a ride on the Wossy love express – and just in case you were wondering, no, I don't own a Type 5 Locomotive, I'm talking about my cock'.  That sort of thing just won't work with Mark Kermode.

People often say to me, Jonathan you must be jealous of old Parky having had access to some of the legends back in the talk show heyday of the 1970s. In a way I do – but I like to think that I would've freshened things up a tad. For instance, if I'd had legendary filmmaker, bon viveur and raconteur Orson Welles on my show, I would've asked him proper questions such as, "Orson, you made Citizen Kane, The Magnificent Ambersons and Touch of Evil. Is your belly button and 'inee' or an 'outee'?" I love cinema.

I was minding me own business the other day, sorting my collection of Japanese Tupperware Star Wars action figures into alphabetical order, when I suddenly had the urge to make another one of my groundbreaking prank phone calls. So I dig out my mobile and scroll down through famous name after famous name until I reach a certain Mark Thompson. "Hello is that the director general of the BBC? I did a poo in your desk drawer and you smell like old man's spunk!" You see, there's always a reason people get paid £6 million a year.

Shoppers Stuck With Taste Of Morrisons 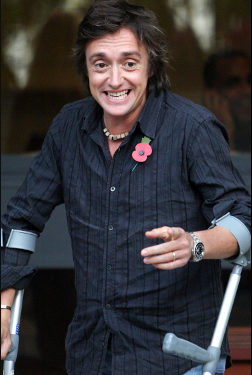 A MONTH after Christmas, thousands of shoppers are still unable to remove the taste of Morrisons from their mouths, according to a new survey. Around one in six of the record numbers goaded through the door by Richard Hammond and Denise Van Outen say many of the items can still be clearly detected at the back of their throats.

Customers have complained about the lingering presence of a range of popular products including Beef and Peach Flavoured Stallion Parts, and the New York Dump, a large chocolate-style cake in the shape of an early-morning shit.

Shopper Helen Archer, from Stevenage, said: "I usually do my food shopping at Sainsbury's – my husband is left handed so he prefers their salads.

"But this year we had my family over for Christmas lunch and I absolutely fucking despise them."

She added: "I bought a pack of Golden Turkey Mittens for the kids, so they'd be able to have a healthy snack and keep their hands warm while they were out taunting war veterans and urinating everywhere.

"They sounded nice, but unfortunately they were disgusting. Three of them still had the feet attached and one of them had a lighter stuck inside it."

Mrs Archer said she would not be buying turkey mittens again, but stressed her children would still get their five a day from Sainsbury's Ever So Special Cheese and Kidney Gujons.