THE Olympics – what the fuck was that all about? Every morning, right, that Scottish bird off the telly would sit on a sofa telling us that we’d won a bronze medal in the womens catapult and that everyone could now go to work with a big smile on their face – in retrospect I think she somehow mistook me for somebody who gives a fuck. There are things in life that are absolute guarantees, right: number one, you’re born, number two, you die, and number three, anyone who ever bought a Kaiser Chiefs album will wake up one morning and hate themselves, forever. Anyway, where was I? Oh yes, life’s guarantees – okay, here’s another one, right – it doesn’t matter how many times you watch the film version of Tommy, the only good bits are a) Ann Margaret swimming in a sea of fucking baked beans and b) there are no other fucking decent bits.

Here’s another thing, right. Where the fuck do all these people get off having a go at me for those I things I allegedly said about Jay-Z? Actually whilst we’re on the subject, here’s another thing that’s bugging me – we’re in Britain, right, so when we’re in our country we call him Jay-Zed, because that’s how you pronounce the fucking letter properly. And another thing, why do we, right, have to pronounce ‘Col-in’ as in the beginning of ‘col-on’ when it comes to Colin Powell  however, when it comes to pronouncing our names they can’t be arsed. For instance, they still say ‘Ber-nard’ with a big, fuck-off ‘errrr’ in at the beginning, and an ‘ard’ as in ‘ard’ like Franny Lee when he battered Norman Hunter – when in fact they should say ‘Bernard. Twats.

Talking of twats, a journalist recently asked me if I watch shows such as Britain’s Got Talent and Pop Idol – ‘the answer’, I said, ‘is simple – whenever one of those shows comes on TV, I think you’ll find me doing something more pleasurable, such as shoving red hot fucking needles down me Japs-eye’. Then there’s the fucking judges  – well getting Piers Morgan to judge a talent contest is like asking our kid to interpret the lifetime work of Stephen Hawking not a fucking clue. Anyway, thank fuck the football season has started – at least that’s one reason to pay me fucking TV licence. Saying that, City are having a few problems at the minute, not so much on the pitch, but the fact my mate Pol Pot’s holding the fucking purse strings – still, at least we’re not quite as bad as KGB United in the ‘being run by a total fucking lunatic’ stakes.

Here’s a couple of thoughts for all those people who rang up the BBC to complain about my ‘lewd behaviour’ on the Chris Moyles Show the other week. Firstly, there’s only one Ronson in the world of rock and roll, and he was called Mick, not fucking Mark. Secondly (and this is totally random) I’m gonna write a letter to Gordon Brown promising him a large donation if he passes a new law which will see anyone who buys a Scouting For Girls album branded with the word ‘COCK’ on their forehead – that way we’ll know exactly who we’re fucking dealing with. 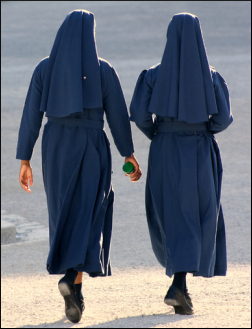 THE hopes of nun fans across the world were shattered last night after the cancellation of the first ever nun beauty contest. Nun my brains out

Father Antonio Rungi revealed he was calling off the contest after it became clear the nuns would simply be used to satisfy a series of depraved and incredibly hot sexual fantasies.

He said last night "I wanted to reflect the inner beauty of my holy sisters. But if you just want to look at nuns' tits then I suggest you try the Jesuits."

Wayne Hayes, a nun lover from Dorking, said: "What a shame. If there's one thing that gets me through the day it's the thought of a load of nuns in swimsuits, followed by evening gowns.

"I'm a big nun man. There are some weekends when it's just me, a bottle of Pinot Grigio, a big bag of Kettle Chips and my director's cut of The Sound of Music. And no clothes obviously."

But Father Rungi added: "Nuns are not objects for your rampant carnal lusts. They are the Brides of Christ and only he is allowed to slip his hand under their heavy garments or ask them to dress up as a cheeky milkmaid.

"Only he is allowed to turn the lights way down low and do that thing that makes her glad she's a nun.

"And even if he doesn't hang around for breakfast, she knows he'll call, because hey, he's Jesus."