One of the greatest things about having a gap year is opening your mind to new ideas and ways of life. Some people might put outlandish labels on this kind of behaviour – like 'running off and joining a cult', but those people are just ignorant. Since embarking on my journey, I have never felt more focused than when I discovered God this week in Bali.

In coming to Bali, it was my goal to bond with those who've been gripped by the icy finger of terrorism. I really believe that I was sent on my gap year for a reason – and that reason is to connect with victims. You see, when it comes to benevolence, I'm automatic like a robot (a benevo-bot if you will).

However, my search on the coastal region of Seminyak turned up no poor souls. In fact, the only souls I found were really drunk Australian ones, who were singing about the cricket. This was really frustrating as, if there's one thing I'm sure of, it's that cricket has almost nothing to do with terrorism.

That evening, I took my lonely crusade to the beach and mulled over the sorry state of world affairs. It was there I met my new dream man and mentor: Jihad Suliman Suliman. No typo, that is his actual name. Plus, Jihad is a proper boy's name and not the name of an international terror cell like I'd previously assumed. I soon realised that Jihad was more Jedi than Jihadi. He explained that his name actually means Holy War. If you ask me, Holy Wars are just as much part of the Jedi's remit as light-sabers and patricide.

As we strolled under the setting sun, the Star Wars analogies became ever clearer as he opened my eyes to the wonder of Islam. He explained all about the Qu'ran and how the Virgin Mary was in it but wasn't a virgin (as I'd always suspected!). In return, I told him how Yoda totally trounced Christopher Lee and how I nearly peed my pants at that bit. The similarities were uncanny and by the end of the night, I realised I've always been a muslim deep down. I am totally going to buy a stylish new veil tomorrow. Even burqas are great – who wants to face Mr Singh in Singh's General Stores after a night of solid boozing and hot knives? If only I'd embraced Islam during fresher's week!

"Those people," Jihad gestured at the drunken Ozzies, "are idiots". Suddenly, I saw the light: They were idiots. And cricket is shit.

I'm so glad I'm not in Australia any more with their silly 'pots' of beer. Jihad is a man of refinement and hell would freeze over before he’d partake in a 'pot'. What a guy!  From now on, I will spread the good word around the world. It's the only way to defeat the evil empire and bring peace to the galaxy.

Can I Have A Car As Well? Ask First-Time Buyers 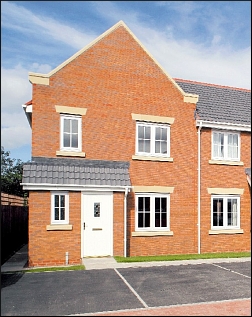 FIRST-time buyers across Britain are hoping the government can see its way clear to stumping up for a motor as well. 'Oh, what's this big space in front of the house?'

They said that while buying them a house is really nice and everything, it will look a bit daft without a car sitting outside it.

Wayne Hayes, a sales executive from Lincoln, said: "What's the point of buying me a nice, new house with a garage and then not buying me a car? Are you trying to hurt me?"

The Society of Motor Manufacturers has also urged the government to buy lots of cars, particularly 4x4s and large petrol estates.

A spokesman said: "If you're buying people stuff then yeah, a car would be good. It'll totally reinvigorate the car market and all that.

"And there'll be a knock-on effect 'cause everybody will go to Halfords for screenwash. Go oooon."

Meanwhile a spokesman for the House Builders Federation said: "So what you're saying is, we can build as many of these shitty little houses as we want and the government will buy them?