This week finds me in the capital of China – somewhere I have dreamed of coming ever since the age of five when my parents bought me my first round of banana fritters.

I vowed then that one day I would travel to the place that produced those red hot, syrupy delights and find out just how they are made. But it was a whole different kind of warm, sticky fritter which characterised my trip to Beijing.

First on my list was Tiananmen Square. It is my duty as a student and  forward thinker to visit this renowned Oriental protest squashing venue. I wondered what could provoke today's average student to bloody themselves like that. I mean, I think it's criminal that the government won't legalise free parties. I also went along to Mardi Gras in London once to protest about gay rights, but it's not really the same as being shot in the back in Tiananmen Square. You'd have to be pretty full on to get the fuzz to open fire at one of those things. I guess after my gap year is over, I should become an activist; maybe DJ Rico and I could run off and join the Tories – my parents would totally freak!

Like gay rights, what happened next was inextricably linked with anuses: Right in the centre of Tiananmen Square, there was small but perfectly formed human poo. I couldn't believe my eyes! My mind filled with questions – 'When? How? Why? Whose?' If only I'd known all those words in Chinese, I could have asked a stranger. What did it all mean?

If it was a protest, the only thing I could imagine it was against was the Olympics. The Games are all about the movements of healthy bodies, I reasoned. But why were the Chinese being so cryptic?

As it happened, the mystery was solved when I decided to take a bus to the Great Wall – just to see if it really is visible from outer space. As I was waiting at the coach stop, I saw a young woman with her toddler. It was clear from its behaviour the child needed to go peepees. The mother spun him round on her knee to reveal a button-down flap on his backside, tore the flap open to reveal his little Chinese bum, and had him plop his tiny, brown parcels all over the pavement.

Initially, I was horrified. But the more I thought about it, the more it made sense. This is a place where nothing is more important than going to the toilet. Perhaps it's this, and not banana fritters, that makes China the greatest country in the world.

Met Chief Regrets Not Shooting Johnson In The Face 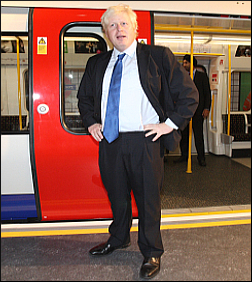 SIR Ian Blair last night admitted he should have shot London mayor Boris Johnson in the face when he had the chance. Is Boris Johnson about to explode?

Announcing his resignation as Metropolitan Police Commissioner, Blair said he had sat through several meetings with Mr Johnson instead of simply filling him with hot lead.

He added: "He's a chunky fellow and his bulky frame could easily have been mistaken for an exploding vest.

"No-one would have doubted my commitment to national security and the only people asking questions would be health and safety, checking to see if I'd washed my hands."

Sir Ian also said he regretted giving a £15,000 contract to a friend when he could just as easily have shot him in the face.

"I have been guilty of poor judgement. When Andy Miller asked to be considered for the job I should have chased him into a tube station and executed him.

"Likewise, when Tarique Ghaffur accused me of racism I should simply have followed him home and gunned him down in his driveway. He's a brown person, no-one would have cared."

Meanwhile home secretary Jacqui Smith claimed Sir Ian had been sacked for no other reason than he was a national embarrassment who did whatever the Labour Party told him to.