My Big Gap Year: And The Wind Cries Mary

THIS week finds me on a pilgrimage to Medjugorje in Bosnia. I'd intended to spend Christmas in Munich getting gubbed on Glue Wine at their famous German markets, but after meeting some really happy Italians in the train station, I changed my plans. They said that their happiness was all because of Santa Maria (who's not like the Santa who comes down your chimney like I initially thought).

Our train took us to Dubrovnik in Croatia and on Christmas Day we were able to make the trip to Medjugorje where, on the 25th of every month, the Virgin appears in an apparition and delivers a special message about religion.  I couldn't understand why everyone wouldn't want to come and have a go – Catholic or not. It's like the time Abz from Five came to the Metro Club in my town: I never really liked Five but I totally had to go just to see if he was real.

The shrine is up a mountain over the Herzegovinian border. Me and my Italian pals found the statue of Mother Mary and we stopped to have a listen. But after a good ten minutes I still couldn't hear anything. I nudged one of the girls, Giovanna, and asked her 'What should I be listening for?  Is it like the Queen's speech?'. She said that I had to be patient and Santa Maria would surely speak to me. I tried and tried but I really couldn't hear much apart from the wind which sort of sounded like 'shhhhhsh, shhhhhhsh'. But as I listened closer, I began to make out what sounded like, 'Shaggy, shaggy…'.

At first I was perplexed but, after ruling out any reference to Scooby Doo, I concluded that this is probably just what happens when you've been a Virgin for over 2000 years.  Later I asked Giovanna what she'd heard. She said Santa Maria had told her peace would come to everyone in the coming decade and that love had been brought to the world by the gift of a new born child.

I was impressed. Then something occurred to me: 'Did she tell you in Italian?'. Giovanna said she had. There it was: the reason I hadn't heard much was because Mary's English wasn't a hundred percent. It’s like how I can only say 'fuck off' and 'blow job' in Greek. Some people just can't do languages. I was good at geography at school, that's why I’m now travelling the world. Mary was probably good at RE.

This Christmas, I've learned the most important message of all: you don't have to get As in all your subjects if you want to be worshipped by billions of people for thousands of years. This time of year, too many of us are paying homage to Mary's biggest rival, SuBo, but I've spoken with the true virgin of Christmas. And that's what makes Medjugorje the greatest shrine in the world.

Warren Beatty Has Had Sex With You 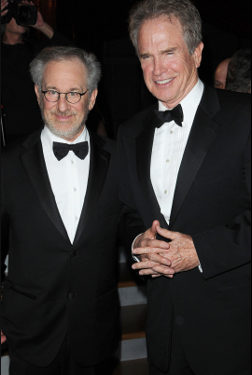 HOLLYWOOD superstar Warren Beatty has had sexual intercourse with you, it emerged last night. A new biography of the Heaven Can Wait actor claims that you and everyone you know have had at least one inch of Beatty's erect penis in one of your holes for at least 0.05 seconds.

Biographer Peter Biskind has calculated that since Beatty was born in 1937 there have been 12 billion humans on Earth and that Beatty has been alive for 2.3 billion seconds.

After subtracting the time it took Beatty to make his films, including Reds which seems to go on for ever, Beatty would have about one tenth of a second to seduce you, remove your pants and penetrate you to his satisfaction.

The author said Beatty must have developed some kind of hypersonic aircraft which allows him to travel from one sexual conquest to the next in less than one millionth of a second without being killed by excessive g-forces.

Martin Bishop, an accountant from Hatfield, said: "It was October 1988 and I had gone to Sainsbury's for a quick midweek shop. I had leaned over to retreive some frozen cod fillets from a freezer cabinet and when I stood up I found that my trousers and underpants were around my ankles.

"I just assumed it was caused by a sudden gust of wind, but come to think of it, there was a slight burning sensation in my anus and I do remember being told to vote for someone called Michael Dukakis."