Romania! The place to be seen for vampires and gypsies. In fact, Romania isn't full of men in fake Adidas tops playing accordions and misunderstanding the municipal refuse collection system. The Romanies are a fantastic race who really know how to do Halloween.

First off, some students I met in a bar invited me to a screening of vampire movies at the university. I went along but the movies were really bizarre: it seemed to be a battle between Grand Moff Tarkin and Count Dooku off Star Wars. You could totally tell they were wearing make-up in some bits. It's kind of a shame the Romanies can't afford to make vampire films as good as Twilight.

Then, one of the guys pulled out a bag of magic mushrooms and suggested we dress up as vampires and ring in Halloween at Dracula's castle. They didn't need to ask twice as I got wired into the freaky tea and face paints!

One of the girls had keys to a van and when we rocked up at Poeneri Castle it was pitch black and freaky as hell. Dracula could have totally been on Grand Designs.

We then decided to go trick or treating in the village but the only place open was a bar full of farmers having a lock-in, drinking home brew and listening to Bad by Michael Jackson on repeat. At this point, the night sort of slipped down the booby shoot: the students started actually turning into Michael Jacksons and the farmers into the Jackson five, all trying to bribe me with Revels. I couldn't reason with them and escaped in terror to the mop cupboard. Thankfully, there I found a Bon Jovi poster from which I drew magical powers. Bon would surely protect me from the troop of evil Michaels and his creepy family. The last thing I remember was screaming  the chorus of Livin' on a Prayer at the top of my voice to show them I meant business.

I woke up the next morning in the cupboard with Bon up my jumper and a smiley face pattern of love bites on my bottom. Random!

Romanies are actually a totally misunderstood people. It doesn't matter if they get your fortune wildly inaccurate or suck all the blood from your body. They're not trying to kill you: they're just trying to leave cheery souvenirs on your buttocks. I suspect that if you're one of those people who hate Romanies, it's only because you've gone totally coco pops on hallucinogenic drugs. 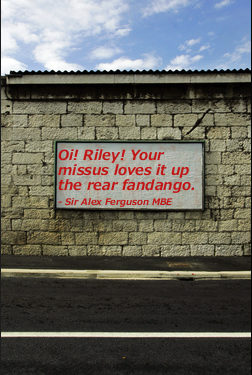 SIR Alex Ferguson has been handed a four-match touchline ban, forcing him to abuse referees by post. The Manchester United manager has vowed to send his incoherent diatribes made from cut-up newspaper print by courier to avoid the postal ban, ensuring his scorn arrives intact.

Members of the reserve team may also be employed to deliver the hate-filled messages to their targets in a bid for first-team football.

Ferguson said: "If needs be I'll hire a sky-writer to fly over the Referee's Association headquarters and spell out the word 'Prickjobs' in smoke."

He added: "In the past I've trained a kestrel with the word 'shitehound' painted on its wings to hover outside of Steve Bennett's window and I once hired out every billboard around Mike Riley's house with messages about what I'd done to his wife while he was away refereeing."

Meanwhile the FA's £20,000 fine – equivalent to two month's wages – means the renowned socialist will have to postpone his plans to buy silk underpants for his fleet of racehorses.

But Alan Leighton, head of the Referee's Association, said: "When a referee makes a gross error of judgement like sending somebody off for coughing or awarding a penalty to a corner flag, the punishment is often being demoted to officiating lower league games.

"I feel the FA must adopt a similar policy and force Mr Ferguson to manage Accrington Stanley for three months. Just please, for Christ's sake don't tell him I said that, would you?"

He added: "The last time I spoke out against him he secretly planted flower bulbs in my garden that, come spring, drew out a picture of me giving oral to Jeff Stelling."