Do you know, there are three things in this life that are a given: 1) Sean Connery will never put his hand in his bleeding pocket; 2) Michael Winner shouldn't be allowed to direct the bloody traffic; and 3) I’ll never be asked to switch the Christmas lights on in Oxford Street ever again, after Roger Moore was sick into the hood of Ken Livingstone's duffel coat that time. Some bloody mate. When I was a kid, Christmas was a miserable bloody time: there was no Xboxes, no Action Man with gripping hands, and no Ker-bloody-Plunk, neither. We was poor in them days, but what we did have was manners and respect for our bloody elders.

Which brings me neatly round to what happened the other day. Every Christmas I goes and visits some of the old folk what lives in my old manor, bearing Happy Shopper mince pies and sherry. Anyway, just as we was entering my old road, I suddenly taps my driver on the shoulder and says to him  "'ere, stop the Roller Reg, I want to get out and walk amongst my people – and have a quick slash while I'm at it." Anyway, we knocks on the door of Mrs Dalrymple what used to live at Number 83, only now a Polish geezer what's called Jaroslaw lives there. Nice bloke – he's coming round to do the Artexing in my new drum next week – anyway, he invites us both in for tea and cake. Five minutes later, I'm just coming out of the kharzi when I see a group of bleeding hooligans running away from the motor. So I tells Reg 'put that slice of bleeding Battenburg down and get my bloody wheels back'. Now Reg is a big bloke, but he's out of shape – well, if the truth be told he's onto his seventh pacemaker – so yours truly was forced to abandon the motor and jump in a minicab driven by some Nigerian bloke called Yomi.

This Yomi bloke seemed a nice enough fella – offered me a chance to make some dough from an uncle of his, some bloke who calls himself 'Dr Julius'. Now, this Dr Julius had recently come into a large sum of money, and needed to transfer it into a UK bank account for some bleeding unknown reason. This Yomi reckons I'll make 15% commission for just giving him my bank details. Sounds good, but I don't want to get my fingers burnt like the time I sank a load of cash into Richard Burton’s pub – the story goes he took the gaff over on the Monday and, by the time the official receivers broke the bloody door down on the Thursday, the only assets that were left was half a bottle of lime cordial and a packet of Big D nuts – and to cap it all, Tony Hopkins had been sick all over the bleeding pool table.

Did you know that I'm currently appearing in pantomime at the Crawley Arts Stadium, alongside Harvey Keitel, Noel Gorden and TV's Raymond Baxter? Well you bloody well do, now. 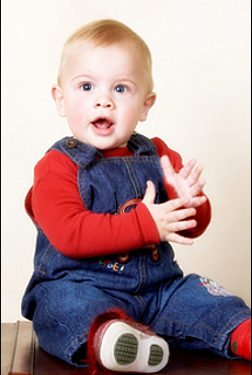 IDIOTS producing smaller idiots will continue to be allowed to name them, it has been confirmed. The announcement comes as latest research showed that people are regularly naming their young after celebrity diseases, types of moss and fungi and most of the rebel planets in Star Wars.

Meanwhile, one little girl from Doncaster was named 0901 233 1212 after Jedward's phone voting number in this year’s X Factor.

Helen Archer, a registrar at Darlington Borough Council, said: "I've had to Botox my face to disguise the looks of disgusted disbelief . One couple wanted to name their daughter using the 'WingDings' font."

Although traditional names such as Kylie and Pikachu still dominate the list of popular names, this year's cultural phenomena showed their influence, with several children christened 'Quantitative Easing' and 'Climate Change Denier'.

A government spokesman said: "While we try to minimise the colossal risk many parents pose to their children – stopping them from getting the little ones drunk at their own christening, introducing them to the vague notion of peas, stuff like that – there are still many areas in which we can't interfere.

"Germany has the right idea with its list of officially-sanctioned names, but they all sound like the director's commentary in a scat video. So, swings and roundabouts, really."

Nikki Hollis, a Peterborough mother of six, said: "I just wanted my kids to have classy names, so I called them Diamonique, Shanterika, Waitrose, Escalade, Tiara and Malibu.

"I'm hoping to have a boy next as I'm quite partial to the name 'Avatar'. I think you'll find it's a type of vodka."