For some, this time of year means binging on mince pies, mulled wine and laxatives. However, for others, the birth of Christ can mean only one thing: dirty, filthy sex with hundreds of prostitutes. And my heart really goes out to Tiger Wood's wife who knows this more than most. If only she'd had the benefit of my expert counsel, she wouldn't find herself in the dire predicament she's in now – a whole year not rolling around in the piles of cash awarded to her family by Gillette and golf.

Elin Woods probably thought she had it all: glamorous, blonde and Swedish – men must have thought she was some kind of outrageous 'cumslut'. However, women with such reputations are often completely clueless about how to truly please the opposite sex. I, on the other hand, have had to use years of experience in the act of coitus to compile my ultra top secret tips on how to satisfy all men (Tiger included). I felt so strongly about Elin's awful situation when I was watching the news the other night and it is only after considerable deliberation that I am now prepared to share the key to my success with the world.

My secret? The little known art of 'cockbiting'. Now, lots of men don't know that they secretly love to have their cocks bitten quite hard during sex. But after some years of experience with men of all ages and political persuasions, I find myself in the privileged position of knowing our male counterparts better than they even know themselves. Sure, it took my boyfriend Donny a few weeks or months to realise how much he loved my technique and it wasn't without some tears that he finally saw the light. But now, my chompy gnashers just drive Donny wild with desire and I tell you this: if he happens to lock eyes with some trampy waitress from LA across a crowded bar, it only takes one flash of my luminous incisors to whip him right back into line and over to the bar to fetch me my favourite cocktail: long vodka with a straw.

If only Elin had consulted me about her problems in the bedroom, she wouldn't be the vacuous prude we now all know her to be. Tiger's eyes would never have strayed as far as that bevy of highly paid slatterns who probably took turns biting him on the cock until the early hours.

The beauty of my secret tip is that it will work on any man, be it Tiger Woods, David Cameron, Jamie Cullum, Phil Collins – the list is almost endless. It's about time that women wised up to the real desires of silly men, who often don’t have a clue about what it is they want. Don't be a fool like Elin Woods: take my advice and keep your man today.

England Unveils Cities That Will Not Be Hosting The World Cup 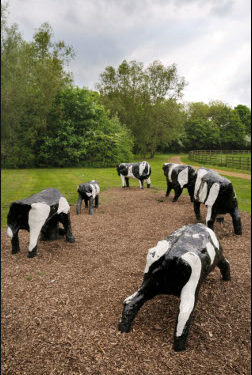 FOOTBALL bosses have unveiled the 12 English cities that have absolutely no chance of hosting the World Cup in 2018. Leeds, Bristol and Sunderland are just some of the venues set for eventual disappointment when a far more attractive country is handed the tournament next year.

FIFA head, Sepp Blatter, said: "The England bid is a very interesting one and should about 50 other countries be ravaged by some terrifying plague that makes your skin fall off and kills you wthin 90 seconds, then yes, you may well see a World Cup match in Milton Keynes."

Several cities were turned down for England's bid, with Derby, Leicester and Hull left out after bid organisers decided they wanted to stand a slightly better chance than Somalia.

Roy Hobbs, the deputy mayor of Hull, said: "I thought we'd developed into a modern, vibrant place for a major sporting event, but then I remembered all the people who live here.

"You might get car-jacked senseless in South Africa but at least you're not going to bump into a Phil Brown or that chap from the Beautiful South who looks like he's got no teeth."

An FA spokesman said: "We had some very attractive bids and the cities chosen represent the finest facilities in England. And Plymouth is in there because we want the rest of the word to think we're a nation of mentally ill pirates."