I watch X Factor in much the same way as the Pope watches Songs of Praise. I know I'm too much of a big shot in the singing department to take anything they do or say seriously, but I enjoy the light entertainment with my glass of weekend Chardonnay. (And abortion clinics should be burned to the ground!)

Even though I work with hippies and simpletons, I still say 'It's not my place to judge'. Thankfully this isn't true for Dannii and Cheryl. It's their role to see others for what they truly are; otherwise X Factor would be pointless and unwatchable. That's why I am appalled that the media has turned on them the way it has.

It's no secret that so-called 'girl band' Kandy Rain are strippers. As an opened-minded woman, I didn't feel threatened by them and even let my boyfriend, Donny, watch their performance unsupervised. I then suggested we go to a gentleman's club to see just what kind of people Kandy Rain really are. At 'Paradiso' I was totally cool with Donny going for a lapdance with an Australian blonde called 'Tammy' (of course, I accompanied him).

As a consummate educator I felt compelled to give her a few pointers on how she could improve her technique. Most strippers don't realise men really want classy, powerful women – not suggestible bimbos who laugh at unfunny jokes and seem unable to smell the awful Guinness farts wafting around the place.

She was a sweet girl but even though I gave repeated demonstrations, she just kept smiling inanely and getting it wrong . Eventually, I gave up. Then, Tammy said we owed her £90! I was gobsmacked and cried 'It's YOU who should be paying ME!'. She said she'd told Donny it was a tenner a song at the start of the dance and he'd agreed. As punishment for his stupidity, we used Donny's Egg card to settle and I'll be withholding my moves from him until I see fit.

All strippers and Australians are callous, conniving bitches who prize money over everything else – even their own families. When I saw Dannii and Cheryl tell it like it is to those naked sex-workers, I punched the air.

If people have the right to know when a paedophile moves in next door, they’ve a right to know exactly what type of person gets their vote on 'X'. You never can tell what kind of alternative lifestyle the contestant might be indulging in: imagine how embarrassed you'd feel if you voted Danyl to win and the very next week he got found dead in a chalet in Benidorm with a kilo of coke in his nostril and some guy's cock up his arse? The public have to be made aware of exactly the kind of hookers, junkies and deviants they're letting into their living rooms – and Dannii and Cheryl should be applauded for their candour. 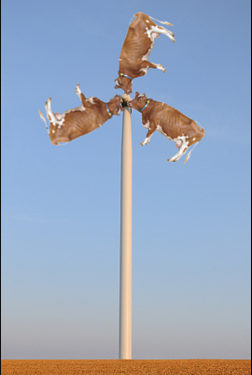 MEAT-eaters are, at long last, to be treated like smokers, it has been confirmed. Lord Stern, author of the UK government climate change report How Come You're Not Dead Yet?, said meat-eating must join alcohol and tobacco on the anti-social behaviour register and called for a massive increase in funding to make you feel like an utter shit, even in your dreams.

In advance of the Copenhagen summit on climate change he claimed that too many people had failed to grasp the implications of global warming and insisted that anyone who had cottage pie last night should be fired from their job, locked in a trunk and chemically sterilised to prevent them from corrupting as yet unborn vegetarians.

He added: "The thing about meat-eating is it uses up a huge amount of meat. This is meat that could be used to make wind turbines."

Meanwhile a group of environmental charities has already commissioned a series of television adverts designed to educate the public about how meat-eating kills polar bears, especially if you then intend to eat them like some kind of Eskimo.

In one film a parent is seen lifting a ham sandwich to his mouth. As it nears his lips his child starts crying hysterically. When the parent moves the sandwich away from his mouth the child stops crying immediately.

And in another advert a child is shown being slowly roasted on a spit alongside the caption 'Oi! meat-eaters! Why don't you just eat your fucking kid?'.

Tom Logan, a pork enjoyer from Hatfield, said: "I am amazed it has taken this long."