THIS dude comes into ma office the other day and I ask him his name and he comes back with ‘Vic’. I says to him: “Tell me Vic, in the last three years have you been involved in a muthafuckin’ accident that wasn’t your fault? Call it ma injury lawyer’s intuition, or call it what you muthafuckin’ will but I’m guessin’ that because you’re in a Goddamn wheelchair with your leg in a plaster that you have, in which case you, ma friend would be in need of ma expert legal assistance.” With this, I picked up a black marker pen and signed his plaster ‘Bad Mother Fucker’. When I’m not screwing the system for every goddamn muthafuckin’ cent there is to be had, I like to hang out with ma homies on the golf course. Now most of you folk will be thinkin’ to yourselves, ‘golf – ain’t that a white boys game?’. Well, strictly speakin’ you’d be correct. However, ever since ma man Tiger began tearin’ things up (and I ain’t just talkin’ on the golf course, you dig?) it would appear that the days of the white conservative country club mothafucka are numbered.

Speakin’ of which, I was out on ma local course the other day when I got a phone call from a guy named Ron who’d fallen off his ladder in the workplace. The dude was shoutin’ and screamin’ at me down ma cell, so I laid the down the law. “Whoah! Ron, you need to calm the fuck down. Now Ron, if you don’t mind me calling you by your first name, what you gotta do ma friend is chill and get a Polaroid of that muthafuckin’ swollen knee, and then call Latisha at my office on 555-222-7981. Now get the fuck off the line brotha, because I got me a tricky eight-foot putt to win this muthafuckin’ hole.”

You get to see everythin’ in this game. A guy who’d dislocated a shoulder because someone had demonstrated massive negligence by leaving a 1,000 goddamn ball bearings on the floor of the muthafuckin’ factory. The woman who slipped on a wet surface, was off sick with broke ribs for two months and couldn’t pay her muthafuckin’ rent – I got her $2,500 and then the bitch sued me for ten grand for sexual harassment because I thought it might be a good idea if she were to show her appreciation by sucking ma dick. Don’t judge me, fool – this bitch was fine.

Then there’s the case of the guy who shattered his pelvis tryin’ to climb into ma muthafuckin’ loft apartment to steal all ma worldly muthafuckin’ possessions, inlcudin’ ma man Richard’s signed baseball cap from Brewster’s Millions. Okay, I have to admit he didn’t exactly have an accident – I might’ve helped speed up the woundin’ process with ma muthafuckin’ baseball bat. But that dude was still on the job – you dig? 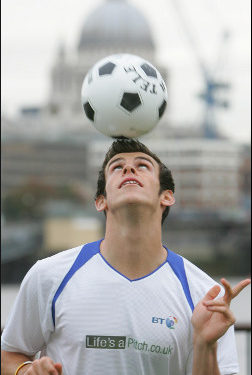 TOTTENHAM’S Gareth Bale is to become the star attraction in a Californian zoo, it was confirmed last night. He can also balance it on his nose

The adult male wing-back will be gradually introduced to his new teammates over the summer, which may include David Beckham if funding for a new breeding program is approved.

Keepers in San Diego hope that Bale settles in quicker than at Tottenham, where Harry Redknapp had to live with the creature’s family of mixed Welsh for over six months before eventually gaining their trust.

The Spurs manager said: “It will be a shame to lose him but he’s already started swinging on the Crouch and flinging his poop at supporters in a bid to display his dominance.

Bale came to the world’s attention after savaging Inter Milan’s Maicon so badly that the right-back later had to be destroyed. Redknapp initially said that he had no intention of selling the club’s most popular exhibit since Ricky & Ossie, Tottenham’s famous pair of novelty Argentinians, in the late 1970s.

But he was eventually convinced that, given the endangered status of Welsh footballers, Bale was better off in San Diego as they were currently negotiating access to a Zeta Jones.

Redknapp said: “There’s only three decent Welsh left in captivity, and with Giggs too old and Bellamy too repulsive to find a breeding partner we have to do what’s right for footballing conservation if we ever want to recapture the days when the Big Nosed Rush stood patiently on goal lines across the whole of England.”