HAVE you noticed how macarons are the sweet craze now that cupcakes have suddenly become social poison?

Well, here’s how to make them while struggling with the legion of inner demons and feelings of inadequacy, paranoia and alienation that make you obsess about small sweet things. It's normal to give them individual names

Online comment-writers to get own internet 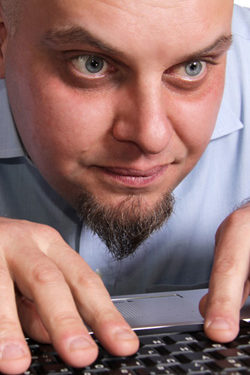 A NEW internet is to be created for people who like writing comments, so everyone else can enjoy surfing the web without their torrents of bile. The new web, dubbed ‘Masturnet’ after users’ penchant for literal and metaphorical self-indulgence, will be just pictures of things with the question ‘Why do you hate this?’ underneath.

Google-built algorithms will reward commenters by adding random numbers of Facebook Likes or retweets, giving users the false impression that they’re not just screaming their repugnant semi-literate vitriol into an ocean of white noise.

Paid moderators will occasionally pretend to be the celebrities or writers that are being commented on, appearing ‘below the line’ while acting chastened and educated by the commenters wise words.

Meanwhile normal people will be able to enjoy sending worthwhile messages and watching iPlayer dinosaur documentaries on a much faster version of the good internet.

Tom Booker of the Better Internet Federation said: The internet is the greatest advance in human culture of the last 30 years, so why must it be dominated by geeks purple with fury about a review that lowered the overall score of Avengers Assemble on Metacritic?

We considered various options, including simply sawing off the bottom half of the internet and dumping it at sea, but this seemed the most humane.”