EVERY Scot will be fitted with a new set of state-of-the-art acrylic teeth within the lifetime of the next parliament, the Lib Dems pledged today.

"It's a bold move," said party leader Nicol Stephen, "but we believe that teeth are a right not a privilege."

He added: "We must give our workers the teeth they need to compete with the new dental powerhouses of the 21st Century.

"Last year more than 400 million Indians and a billion Chinese were fitted with braces. It is only a matter of time before these teeth overwhelm us all."

Mr Stephen said the Teeth For All (Scotland) Bill would be introduced within 100 days of the Lib Dems completing a "loathsome, tawdry, self-serving coalition deal with a party more than twice our size".

THOSE LIB DEM COMMITMENTS IN FULL…. 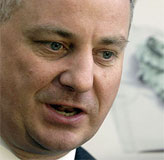 The Labour leader said: "Our infants are being left behind in the modern global economy.

"We must equip them with the skills they need to compete with tiny children in China and India.

"I want to see our toddlers learning difficult languages, not just French and German. Let's teach Klingon in nursery schools and show those little Chinese babies who they're up against."

He added: "I go around the world and see what they do in other nations and I always think to myself, 'why aren't they teaching these babies Klingon?'"

McConnell said there were no plans to improve the teaching of English as most commercial transactions in the 21st Century would be on a Klingon to Mandarin to Hindi to Klingon basis.

THE REST OF THOSE LABOUR MANIFESTO HIGHLIGHTS….